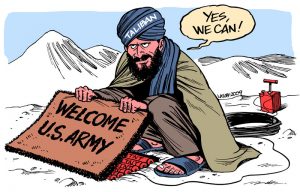 Top U.S. military commanders and diplomats are weighing a proposed strategy shift in the Afghanistan War centered on expanded military collaboration with Russia.

On separate occasions this week, Secretary of State Rex W. Tillerson and Army Gen. John Nicholson, the top U.S. commander in Afghanistan, spoke publicly of Washington and Moscow’s shared interests in the fight that could also align with each country’s larger regional security goals.

“There may be opportunities for cooperation in Afghanistan. We’ve not yet come to what that might be, but we’re talking about it,” Mr. Tillerson said Tuesday at the Woodrow Wilson International Center for Scholars in Washington.
Analysts say such a partnership would signal a dramatic reversal for the Pentagon, but Washington and Moscow are having behind-the-scenes military communications at the highest level more regularly than have been reported…