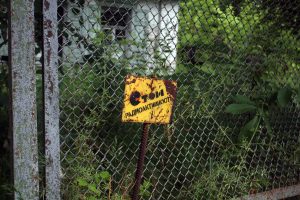 We have been reporting at Tsarizm for several months on the radioactive cloud that has been blowing over Eastern Europe with dangerously high levels of Ruthenium-106. Reports have shown contamination 1000x normal in certain areas. Earlier estimates from French experts chalked up the radioactivity to a nuclear accident in the Ural Mountains, possibly in Russia or Kazakhstan. Russia denied having any type of nuclear event which would have released such a specific radioactive element.

On Tuesday Russian authorities confirmed the previous reports of a spike in radioactivity in the air over the Ural Mountains. In a statement, the Russian Meteorological Service said that it recorded the release of Ruthenium-106 in the southern Urals in late September and classified it as “extremely high contamination,” reported Zero Hedge. The area is near the Mayak nuclear plant which has a history of nuclear accidents and pollution.

This Part of Russia is Literally Exposed to 1000x the Normal Radiation Rate https://t.co/3YY5fjGM9S pic.twitter.com/AKbOJqUrhh

Russia’s state-owned nuclear corporation, Rosatom, today released a statement, “The contamination of the atmosphere with ruthenium-106 isotope registered by Rosgidromet is not linked to the activity of Mayak. The measurements which Rosgidromet has released suggest that the dose people might have received is 20,000 times less than the allowed annual dose and presents no threat at all to health.”

The Environmental Ministry on Tuesday said the meteorological service had released an “incompetent evaluation that has led to mass dissemination of false information in the mass media..Levels of Ruthenium-106 were several times lower than the accepted limit, as established by the norms of radiation safety,” the statement read, reported The Moscow Times.