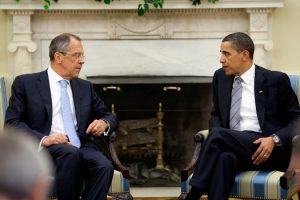 A whiff of detente hung in the Manhattan air after President Donald Trump’s speech at the United Nations this week, which triggered the mainstream media and dictators around the world alike. While Trump certainly trumpeted a distinct American nationalism, which horrified the Left, he also suggested a way forward out of the current dumpster of Russian-American relations.

It is no secret that Russia places the blame for the horrendous state of relations between the two countries directly on the Obama administration.

Russian Foreign Minister Sergei Lavrov said it bluntly this week, “Russian-American relations suffer not only because there are conflicts, but because the previous administration behaved meanly, vindictively, planting a delayed-action mine under Russian-American relations…I did not expect this from a Noble Peace Prize winner (former President Barack Obama),” reported Russian state news agency TASS.

“It is very bad that a vast potential of our bilateral relations has been mothballed due to Russophobic hysteria and that global issues suffer since Russia and the US cannot coordinate [on the issues].”

After Trump’s speech however, Lavrov was more upbeat.

“I think it’s a very welcome statement, which we haven’t heard from an American leader for a very long time,” he said regarding Trump’s statement that America would not impose its way of life on others.

“We do not seek to impose our way of life on anyone, but rather to let it shine as an example for everyone to watch, said Trump. “Strong, sovereign nations let diverse countries with different values, different cultures, not just coexist, but work side by side on the basis of mutual respect.”

Lavrov added this about discussions with Secretary of State Tillerson, “What I feel, talking to Rex Tillerson, is that this is the position of the administration, that they are not happy with the current state of relations, and we are not happy at all.”

It seems the Trump administration has to thread the needle of confronting Russia actions geopolitically while finding a way to work with Russia where we have common ground, like stopping the Islamic threat and the culturally Marxist agenda. The constant drumbeat from the corrupt media and Obama Deep State holdovers pushing a war with Russia does not help this effort one bit.