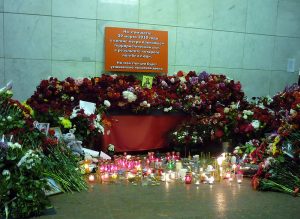 Russian security services, the FSB, arrested two suspects living in Moscow who were from Central Asia; they were planning attacks on populated areas in the Russian capital. The Islamic State members were planning a suicide bomb as well as knife attacks. Bomb-making materials were uncovered. “He confessed to planning a suicide attack,” said the FSB.

“The Federal Security Service uncovered and thwarted a criminal plot by two natives of the Central Asian region on the territory of Moscow and the Moscow region, who planned terrorist attacks at heavily-populated locations on September 1,” said the agency statement, reported Russian state news agency TASS.

“According to the security agency, one of the terror suspects detained ahead of September 1, Knowledge Day, which this year coincides with one of the chief Muslim holidays Kurban Bairam, posted his video address to members of Islamic State on the Internet. “In this appeal he pledged allegiance to terrorists. After this, the newly-fledged member of the international terrorist organization, the Islamic State, planned to attack civilians with the use of blade weapons. Information on contacts with this organization’s recruiters and instructions for the planned crime were found on his mobile phone,” FSB said,” wrote TASS.

Russian State Duma Passes Law To Strip Terrorists Of Russian Citizenship
Russia continues to have a major terror problem emanating from the Central Asian region; Dagestan in particular. The are is important to the United States as the Boston Bomber visited clerics in Dagestan prior to the attack on the marathon. Thirty percent of the Russia population is Russian.