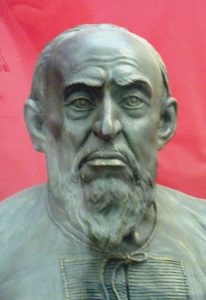 The first monument to Ivan the Terrible, the Russian tsar who rule with an iron fist and his know for his brutality, was recently erected in Moscow. Ivan was a consequential tsar who many attribute to founding the system today in Moscow where the leader is protected by a group of fiercely loyal oligarchs who guard the Russian ruler in return for economic riches.

The statue was initially placed in Alexandrov in Vladimir region where Ivan lived for his eleven year exile; however, the statue was dismantled within an hour of its erection. The monument is now at the Alley of Rulers in central Moscow, reports The Moscow Times.

“The Alley of Rulers in Moscow features 33 bronze statues of Russian rulers dating back to ancient times and until the 1917 Revolution. Nearly all have been cast by the famous, but controversial sculptor Zurab Tsereteli,” reports The Moscow Times.

More statues are said to be in the pipeline including Lenin and Boris Yeltsin.

It is a fact that authoritarian leaders are regaining in popularity as Russia becomes more nationalistic and the brutally of certain leaders, like Stalin, starts to fade.

Opinion: The Time Is Right For A Deal With Russia