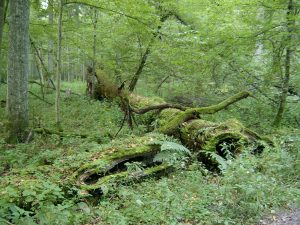 Bialowieza Forest, an ancient, primeval woods on the border between Poland and Belarus, is the subject of environmental protests as activists try to stop logging in the area. Multiple demonstrators climbed trees, hung signs, and chained themselves to logging equipment to bring attention to the issue in the world press. The forest is a UNESCO World Heritage site.

Poland’s government says the trees are under attack by beetles and need to be harvested to make the forest healthy. The environmentalists say the Polish government is simply looking for short-sighted profits and endangering the ecosystem in the region.

“Foresters have crossed a red line, they are devastating Poland’s biggest natural treasure for the sake of ad hoc profits. We will not be looking on passively,” said Robert Cyglicki from Greenpeace Polska, reported Reuters.

The European Commission is investigating the complaints. The government says the logging is within EU law and protects the environment.