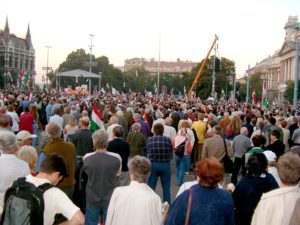 The targeting of George Soros founded, Central European University in Budapest, by Hungary’s Prime Minister Orban via a new law passed through parliament, which uses a technicality to force the institution to close, has been causing a festering resistance within the Eastern European country. The government sees George Soros as a threat, funding Marxist elements within society and weakening the government’s hold on power. Students see the university as a symbol of the European Union and freedom, remembering the days of the Iron Curtain and Warsaw Pact.

Protests have been occurring regularly regarding the possible closing of the school but today the protests developed into large scale demonstrations.

About 60,000 people attended the rally in central Budapest, Index news website cited organizers as saying. More than 40,000 people had indicated on the organizers’ Facebook page that they may do so — a large crowd for Hungary’s almost 10 million inhabitants, who have rarely turned out in force to protest against Orban’s policies, reported Bloomberg.

Bloomberg also reported, Ader has until Monday to sign the legislation, return it to parliament or send it to the Constitutional Court if he has legal objections. CEU is “determined to stay in Budapest” and will resort to “all legal remedies” to remain there, Chairman of the Board of Trustees Leon Botstein said in a statement on Thursday.