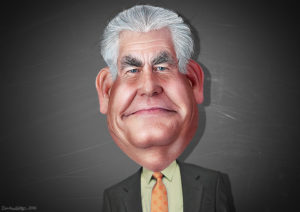 The newly minted Secretary of State Rex Tillerson will be meeting with his Russian counterpart, Sergei Lavrov tomorrow in Germany for the first time.

“The meeting with Secretary of State Mr Tillerson has been planned and is being prepared” on February 16, when both diplomats will be in Bonn for the G20 ministerial talks, spokeswoman Maria Zakharova was quoted by Russian agencies as saying.

Rumors are coming out of Moscow that Russia is concerned that Trump is changing his mind on Russia’s annexation of Crimea and the turmoil in East Ukraine, and may not lift sanctions on Russian officials and the economy.

Zakharova said Lavrov will “discuss bilateral relations, which were taken into a dead end by the previous administration”.

“The plan is to discuss the main international crises which our countries have cooperated on and must cooperate,” she said. “Of course, regional issues will be examined,” reports AFP.

Video: Watch EU MP Nigel Farage Absolutely Torch The EU Over Its Treatment Of Hungary As It Fights For Borders