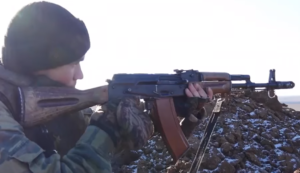 The killing in Donbass continues, despite a fragile peace deal signed in late December in Minsk by both sides and mediated by the Organization for Security and Co-operation in Europe (OSCE). Over 10,000 people have been killed in the conflict which began when pro-Russian separatists took over Eastern Ukraine after the pro-Russian government of Yanukovych was overthrown in the Maidan Revolution.

Rebels in the DPR stronghold of Donetsk complained that Ukrainian forces shelled the frontline area Friday evening and overnight. Donetsk People’s Republic (DPR) Alexander Zakharchenko was reported as saying, “Ukraine always demonstrated it would not carry out the agreements reached in Minsk. There was no point from the start in accepting the ‘regime of silence’, it was not observed.”

The separatist news agency DAN reported Ukrainian forces, “submitted a number of frontline populated areas to massive bombardment around Donetsk, Yasinuvata and Gorlivka and towards the south.”

For its part, the Ukrainian military reported rebel artillery 23 times and 3 times with heavy weapons.

“The broadening of the geographical location of combat and the total amount of hostile shelling demonstrates the enemy does not plan to carry out the Minsk agreements and is disposed to escalate the standoff,” said Ukraine’s military spokesman Oleksandr Motuzyanyk, reported AFP.