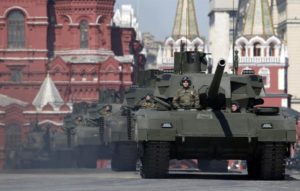 Russia’s FSB, formerly the KGB, has accused Ukraine of two armed incursions into the Crimean Peninsula over the last few days. The Russian security agency says one Russian soldier and another FSB employee were killed. One supposed Ukrainian commando was arrested and a variety of light weapons were reportedly seized.

President Vladimir Putin vowed “further security measures” in response to Ukraine’s “stupid and criminal” acts. Large amounts of Russian armor, military vehicles and troops were reported being seen moving from the Crimean crossing with Russia in the east, headed to the Ukrainian border area.
“Russian accusations against Ukraine of terrorism in occupied Crimea sound as preposterous and cynical as the statements of the Russian leadership about the absence of Russian troops in the Donbass [region of rebel-held eastern Ukraine],” Petro Poroshenko said. “These fantasies are only a pretext for making more military threats against Ukraine,” reports the BBC. 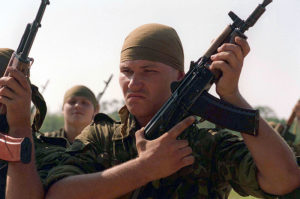 The Kremlin accused Ukraine of heavy fire across the Ukrainian border into Russian held territory and of attempted sabotage on Crimean infrastructure. Ukraine fears these incidents are simply fabricated as a way for Russia to take more Ukrainian territory in the absence of strong Western support for the embattled government in Kyiv. The conflict in East Ukraine smolders as well with recently the highest civilian and military casualties since the Minsk ceasefire was implemented. Vladimir Putin is a master at escalation and deescalation. Perhaps he has decided the last few months of Obama’s term are the time for escalation in pursuit of Russia’s foreign policy goals.

Istanbul Killers Were From Russia And The ‘Stans