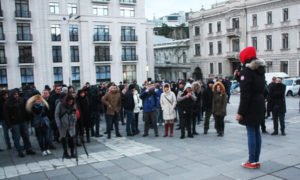 The Georgian national currency, the Lari, has been steadily devalued over the last two years. This year, its 21st year of existence, the Lari hit record depreciation levels several times, including on December 18, reaching 2.68 GEL against the USD.

Several factors caused the dramatic depreciation of GEL according to the Government’s Administration of Georgia, such as: 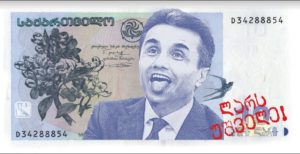 Significant depreciation of the national currency in neighboring trading partners,

Increased outflow of foreign currency due to large import volumes in recent months, which failed to re-balance against exports because of declining prices in the export market,

Negative expectations towards the GEL exchange rate, resulting from speculation by various groups.

For Georgia, as a country dependent on imports, devaluation of the national currency causes excessive product price growth, or inflation. In addition, the most problematic issue for the population of Georgia is excessive dollarization of the commercial loan portfolio (According to the National Bank, the credit portfolio of the banks is around 16.5 billion GEL, out of which not less than 60% is nominated in USD.) Experts state that GEL devaluation has a negative impact on investors and is extremely unfavourable for importers, all causing dramatic increase living costs in Georgia. Debt denominated in foreign currency can lead to disaster in times of economic crisis.

The opposition and the major party political party in Georgia, all agree that economic growth is the only way to save the Georgian national currency, leading to a stable exchange rate against the USD.

Therefore, the government and National Bank of Georgia plan to carry out a series of combined measures to boost the economic growth in the country. Government officials declared the plan includes new regulation on business and a reduction of the dollarization rate. On December 15-16, the Parliament of Georgia adopted a bill increasing the excise tax on tobacco, motor vehicles, oil products, as well as taxes on gambling, starting from January 1, 2017.

Such recent government statements caused the Georgian population to become suspicious towards the government economic plan. 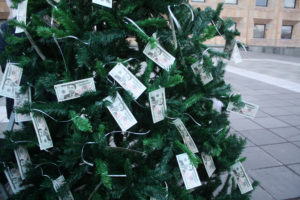 On December 17 civil society activists gathered in front of the Chancellery of the Government of Georgia in order to protest the proposed action plan and to recommend specific solutions.

“The national currency keeps on hitting historic lows, and the government isn’t taking any action. Instead, the action plan of “Georgian Dream party” leads us to the deepening crisis.”

“We demand the government to make quick and smart decisions against the devaluation of the GEL, such as a vast reduction of government expenses and a reduction of taxes, instead of raising them” – stated the organisers of the protest.

The organiser of the demonstration was the platform, “Defend Liberty”. During the protest activists symbolically decorated Christmas tree with printed memes saying “Help the GEL”.

Finally, what will help the GEL, regulating the market as government proposes or less regulations and lower taxes as civil society demands?

The question remains unanswered but one thing is certain – recent tendencies suggest we may never witness a return of the old exchange rate of GEL to the dollar; instead, the challenge is to fix it at a new point. 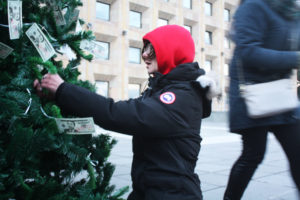 Russia Sees Trump As A Pragmatist

Belarus Urges Moscow To Exclude “Bookkeeping” From Relationship With Minsk