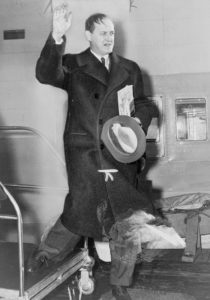 The currently underway “private” visit to Moscow by ex-Trump adviser and ex-Merrill Lynch guy Carter Page is the subject of a lengthy article this morning on the Russian nationalist site tsargrad.tv. While acknowledging the private nature of the visit, Mr. Latyshev writing for the site theorizes that the visit is designed to explore ways in which the incoming Trump administration can start repairing the frayed relationship between the US and the Russian Federation.

Mr. Page’s visit is portrayed as part of a longstanding tradition by US presidents of relying on discreet private envoys to smooth and patch relations with Russia, citing as an example Roosevelt’s envoy to the USSR, Harry Hopkins. The Russian leaders at that time were well-aware of Mr. Hopkins’ close ties to FDR and he was always welcome in the Kremlin.

The article analyzes the need for improvement in US – Russian relations, citing a number of grievances arising from Obama’s administration overly ideological approach to policy making as executed by ex-Secretary of State Clinton. Chief among them are Russia’s isolation on the world stage, the Ukrainian conflict and the encroachment by NATO into what Russia sees as its rightful sphere of influence.

The article expresses hope and belief that this is all a thing of the past and that a much more pragmatic policy towards Russia will flow out of the new White House, led by people such as the new National Security Adviser General Flynn, who has been a frequent visitor to the country and is well-regarded there. A certain amount of concern is expressed for the possible hiring of Mitt Romney as the Secretary of State, as his globalist and anti-Russian views are well-known in Russia. However, cautious optimism prevails that Mr. Trump will either keep Mr. Romney in line or simply let him go.

US Frustrates Oligarch’s Cat And Mouse Game Over Sanctions