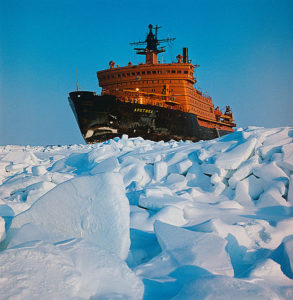 Russia has made a renewed push for control of the arctic in its push for natural resources and strategic positioning. Russia has also filed a claim at the United Nations for a large part of the region. The claim has yet to be adjudicated.

The Baltic Shipyard in St. Petersburg has floated out the hull of what will become the world’s largest and most powerful twin-reactor icebreaker, The Arktika, a TASS correspondent reports from the scene of the event.

“The Arktika’s launch is a victory in all senses,” Rosatom chief Sergey Kiriyenko said. “Today we can say that by the end of 2017 this icebreaker will join Rosatomflot. This will open up fundamentally new opportunities in front of our country in terms of maintaining the national defenses and year-round navigation in the Arctic and ensuring economic development in a region that is of crucial importance to Russia and the whole world.”

The keel of the nuclear-powered ice-breaker The Arktika (project 22220) was laid at the Baltic Shipyard in November 2013. The project’s costs are estimated at 122 billion rubles ($1.9 bln). The shipbuilder employed certain technologies and know-hows that have never been used before in any other nuclear-powered vessel. The ship’s variable buoyancy feature will allow for helping ship convoys through ice floes and frozen river mouths, reports Russian state news agency TASS.