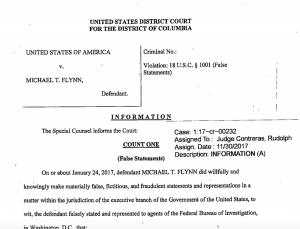 Former National Security Advisor Michael Flynn has been charged in the investigation by Robert Mueller into links between the Donald Trump campaign and alleged Russian involvement in the 2016 US election. In a US District Court filing Flynn is accused of the following: “Flynn did willfully and knowingly make materially false, fictitious and fraudulent statements and representations.”

Although a lot of media is focusing on the first charge mentioned, relating to December 29th 2016 sanctions the US imposed on Russia and the expulsion of 35 Russians, the more interesting issue may relate to a UN resolution. The second charge notes, “on or about December 22nd, Flynn did not ask the Russian Ambassador to delay the vote on or defeat a pending United Nations Security Council resolution, and that the Russian Ambassador subsequently never described to Flynn Russia’s response to the request.”

The issue of the sanctions and the tit-for-tat expulsions that would have resulted from the December 29th events is interesting but not surprising. That a member of Trump’s team, and subsequent National Security Advisor, held a conversation with Russian Ambassador Sergei Kislyak about potential changes in policy after Trump was sworn in was in line with Trump’s known policy of wanting better relations with Russia.

But why seek to influence a UN Security Resolution and which resolution? In the last two weeks of 2016 the UN Security Council considered a dozen resolutions. On or about December 22 the UNSC was considering resolution 2332 on Syria that renewed humanitarian relief delivery. It passed on December 21. On December 23 the UNSC passed a resolution on Liberia, and Resolution 2334. Resolution 2334 spelled out that “Israel’s settlements have no legal validity, constitute flagrant violation of international law, security council reaffirms.” The US abstained while 14 delegations voted for the resolution.

Russia voted for the resolution but its UN ambassador, Vitaly Churkin, who died in February 2017, gave brief comments about the resolution according to the UN, “explaining that he had been puzzled by the process around the resolution and by the haste with which it had been ‘pushed’ to the vote.” Churkin also “agreed with other speakers that settlement activities undermined the chances for a two-State solution, as did acts of terror and incitement to violence.” He reminded the UNSC that Russia was part of the Quartet helping to work for peace. On December 30 the UNSC supported a resolution on Iraq dealing with escrow accounts and on December 31 supported UNSC Resolution 2336 that supported Russian work towards peace in Syria.

We now know that Flynn’s resignation, after only 24 days on the job, in mid-February 2017 was tied to these discussions. He is thought to have denied speaking with Kislyak in discussions with Vice-President Mike Pence. “In his resignation letter, Flynn claimed he had mistakenly misled the vice-president, Mike Pence, and other Trump officials about the nature of phone calls in December to the Russian ambassador, Sergei Kisilyak. When intelligence leaks about the communications began appearing last month, Pence and other White House officials insisted that the contact had only involved an exchange of Christmas greetings and arrangements for a future phone conversation between Trump and Vladimir Putin.”

Flynn, who has pled guilty, released a brief statement on December 1st. “My guilty plea and agreement to cooperate with the Special Counsel’s Office reflect a decision I made in the best interests of my family and of our country. I accept full responsibility for my actions.”

CNN notes: “According the FBI statement, Flynn communicated with Kislyak after being asked by a senior Trump transition official to find out how foreign governments stood on the coming UN Security Council resolution about Israel.” This puts Israel clearly at the center of Flynn’s discussions with the Russian ambassador and appears to show that Trump’s team, knowing that the US might abstain on UNSC Resolution 2334, hoped the Russians could slow it down. US Senator Dianne Feinstein has released a statement saying: “This shows a Trump associate negotiating with the Russians against U.S. policy and interests before Donald Trump took office and after it was announced that Russia had interfered in our election.” Her statement says this could be a violation of the Logan Act, which prohibits US citizens from carrying on correspondence with a foreign government to influence measures that relate to disputes with the US.

We know that Trump has opposed UNSC Resolution 2334. “This puts Israel in a very poor negotiating position and is extremely unfair to all Israelis.” He called for a veto on December 22. On December 23rd Trump was quoted as saying “thing will be different after Jan. 20.” Israel was looking to Trump for support.

Foreign Policy actually reported this in February 2017, not knowing it would lead to an indictment. “Michael Flynn, his national security advisor designate, and other members of the president’s transition team launched a vigorous diplomatic bid to head off a U.N. Security Council vote condemning Israeli settlements.” It notes “the president-elect’s team was unable to persuade a single country to change their vote, including Britain, Egypt, and Russia, three countries that have gone out of their way to cultivate better ties with the new American leader.” Flynn was key to these efforts, “Flynn himself placed calls to foreign ambassadors on the U.N. Security Council, including those from Uruguay and Malaysia.”

What no one knew at the time was that he had also made false statements to the FBI about the efforts regarding trying to convince Russia to do something about the resolution. What is interesting in this respect is that his efforts are seen as part of a larger campaign by the Trump team to stop 2334. FoxNews reported Feb. 16 that “Mike was doing his job,” Trump said at a news conference Thursday. “He was calling countries and his counterparts … I would have directed him to do it if I thought he wasn’t doing it. I didn’t direct him, but I would have directed him because that’s his job.”

We don’t know all the details of Flynn’s statements about his call to the Russian Ambassador or what the ambassador said in return, both of which are at the center of the case.

What we do know is that after the Egyptians got the vote postponed on December 22 that the Russians under Churkin attempted to the same on December 23, according to an Israeli report “Churkin shocked the other ambassadors of the 14 Security Council member-states when he proposed postponing the vote until after Christmas. There had not been enough discussion on the wording of the resolution.” Russia had doubts about the vote.

That Flynn pled guilty to talking to the Russian ambassador in December is interesting because it appears he may have misled them because of accusations already circulating that Trump was too close to the Russians. Instead of it being some kind of clandestine connection to the Russians, the conversation that took place was in the context of Trump’s openly stated policy against Resolution 2334. Flynn’s contacts on this issue have been known since February of 2017, so it’s not clear why it took 10 months to charge him. It doesn’t appear this is particularly a “smoking gun” in the Russian investigation either. it doesn’t show contacts between Russia and Flynn during the campaign, but rather just weeks before the inauguration. It’s not the first time a team has reached out to foreign leaders in the lead-up to the inauguration. Nixon’s team even did so infamously in the lead up the election regarding Vietnam.

So what did we really learn from this?

US abstains and UNSC Resolution 2334 passes

Iran’s Leadership Has No Solutions, And The People Know It

Russia Does Not Want An Arms Race, Says Putin Aide