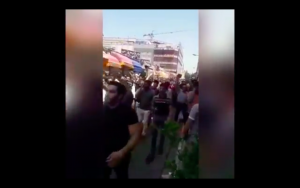 Tehran’s expensive dollar rates are causing social unrest and one major act of protest happened a few hours ago at the Aladdin Mobile Market. Thousands of people merged at the market center after the dollar hit against 9,000 Tomans.

Shopkeepers and marketers closed up and headed to Charsou Bazaar to protest. Some of these demonstrators marched from Jumhouri Street towards Baharestan Square. Shopkeepers at Aladdin Mobile Market told other store owners to join their protest and chanted, “We don’t want a dollar for 10 thousand Tomans!

These days in Iran, the Rial is fluctuating quite widely and many traveling to Iran would have no idea what their money is worth. The protest broke as police dispersed the growing rally.

A businessman who runs a store at this mall explains that these marketers have long decided to close down but they would have had to pay the rents anyhow. This time no one was willing to take it any longer so they decided to close their shops today. They are watching to see what officials will do about it.

There are a lot of videos received from Iran , with demonstrators chanting, “Down with dictator!”

The protesters, with more store-owners joining their ranks as the demonstration continues, are reported to be chanting:

“Let go of Syria, think about us!”