Have you ever piloted a fixed or rotary wing aircraft? Unless you are among the one tenth of one percent of the population in the United States who have been certified by the Federal Aviation Administration to do so, the likely answer is no. Having flown small aircraft for business and pleasure, I can attest to the high level of skill required from even casual aviators like myself. Commercial pilots, let alone military ones, hold me in a state of awe. It is difficult to imagine for most of us, me included, the level of skill that is required from these folks. It is a skill that requires constant updating and upkeep and on which many thousands of lives depend every single day.

Like pilots, most Americans make their living by gaining, exercising, and maintaining a high level of skill. Making a hundred perfect steaks every night is not easy. Neither is checking the quarterly filings of public corporations for compliance with Security Exchange Commission’s Byzantine rules and regulations. Most, but not all. Some of us end up developing a shtick, a routine that requires no particular skill, but for whatever reason becomes a more or less valuable commodity for which there is a degree of demand in the American marketplace. The key to becoming a shtick person, a shtickster, if you will, is a highly developed knack for opportunism. Perhaps one day, as you are going about your daily routine, you get to experience something, participate in something, do something, and all of a sudden EUREKA! You instantly know that this is your THING. This is your big break. If you act now, right away, you can fulfill the other condition for being a successful shtickster: being the only one who owns your shtick. You see, shticks are only good when those who consume them know that there is only one source for them: you. Shticks, unlike real skills, tolerate no competition. As a pilot, even a recreational one, you constantly compare and measure your skills against those of other pilots. You welcome competition, because you want to be the best, safest pilot that you possibly can be. This applies to line cooks, dental assistants and everyone in between; people who make an honest living with their hard-won skill-sets.

But not to shticksters. The key to their success is to corner the market; to become completely and totally identified with their shtick, to become one with it. Several so called “professions” lend themselves to shticksterism, but none more so than journalism, especially in America. Even before independence and certainly since, Americans were blessed to have always been the most powerful entity on their vast continent. Combined with their relative geographic isolation from the rest of our turbulent planet, this made Americans rather uninterested what today would be called “hard” news. Not finding a market for actual news reporting, American journalism since its very beginning trended towards the salacious and the scandalous, much in the vein of folks like Geraldo Rivera. In the age of newsprint and duels with pistols at dawn, there was sufficient self-regulation of this yellow brand of journalism (so called after the cheap unbleached paper on which it was printed) to render it harmless. But no longer. Founding Fathers’ support for a free press as a necessary condition for representative government has been progressively misinterpreted as free from facing the consequences of its actions rather than, as intended, free to voice its opinion and FACE THE CONSEQUENCES OF HAVING DONE SO. A long progression of statutory and precedent law alike now renders journalists immune to any and all consequences of their actions, making it virtually impossible for them to exceed any limits of slander, lies, and rank political advocacy masqueraded as “news”. This turn of events made possible the rise of the greatest shtickster of all time, one Bob Woodward. 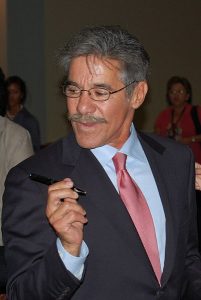 The case of Mr. Woodward can be and should be studied as the sine qua non of shticksterism. In the 1970’s, the early days of advocacy journalism, when all remaining norms of impartiality, honesty, and decency were being sacrificed on the altar of communist activism, Bob found himself, coincidentally, at the epicenter of the original “gate”, the Watergate scandal. On the heels of endless warmongering in Indochina by two Democratic presidents that resulted in the most vilified major war in American history, a Republican president, Richard Nixon, had the guts to admit defeat, cut the losses, concede the corrupt South Vietnamese to the communist block, and normalize relations with China, saving countless American lives and treasure in the process. The likes of Mr. Woodward, pretending to be in love with anti-war demonstrators and simultaneously spitting in the faces of returning veterans, didn’t like Nixon’s peacemaking policies one bit. His Americanism, his support of capitalism, sealed his fate. And so when the opportunity arose, they brought him down.

A Hollywood movie starring Robert Redford and deifying the dynamic duo of Woodward and Bernstein was made and a shtick, perhaps THE shtick, was born. From now on, Bob would be the Exposer of Presidents. That would be his shtick and nobody could possibly have his kind of credentials for it; he would OWN IT. Of course, Democratic presidents like Carter, Clinton, and Obama would not be “exposed” nearly as hard as the Republican ones; after all every successful shtickster must know his audience and his masters. The shtick must go on regardless of who is in the White House, but Democrats would get gentle reminders that “we all” expected them to be even more saintly (read communist), whereas Republicans would get ripped to pieces. And then there is Trump.

If at this point you are wondering how this shtick can be maintained, what happens when the president is kind of a middle of the road boring guy in the mold of George W. Bush, you are missing the crucial point about shticksterism. When you practice a skill, divorcing yourself from reality carries heavy penalties; you may get fired, you may die, you may kill others. When you are a shtickster, reality is only a raw material, one that can and must be transformed into anything that fits your shtick. Geraldo’s Al Capone vault comes to mind here, but it was only a harmless prank by a minor leaguer. Big League shticksters like Woodward never allow themselves to fail. When they open a vault, they are not surprised by its contents because THEY PLANTED THEM THERE. 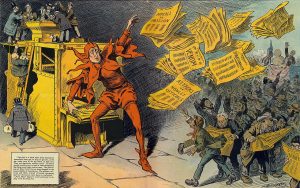 When Woodward opens the vault of Trump’s White House, he knows what his audience wants to be there and he sets out to EXCEED THEIR EXPECTATIONS. The picture he draws of the administration is fiction. The quotes are made up. It’s really as simple as that. Now, we must not confuse shticksterism with naiveté; offshore accounts in the names of corporations no one has ever heard of have undoubtedly seen some cash inflows around the same time that “anonymous sources” whose names may rhyme with Priebus or Manigault were being recorded providing “quotes” and “filling in the background details”. Memory sticks with these recordings have doubtlessly found residence in several DC area bank vaults. The legendary Washington Post reporter Bob Woodward, as the Canadian Broadcasting Corporation referred to him this morning, is much too smart to have his behind on the line should libel laws be changed and his “reporting” challenged in a court of law.

Does any of this matter? Surprisingly, not in the way one may think. The political effects of shticksterism are negated by the “wokeness” of the American voting public bred from decades of overindulgence in rank partisanship by the American media. Today, activist “journalism” simply plays to its base, convincing no one to change their minds. On the contrary, it reinforces most folks’ entrenched beliefs. No, the danger lies elsewhere. America today is exposed to the rest of the world, economically, militarily, and even epidemiologically more than ever before. Furthermore, countries like China and even Russia are beginning to rival America’s military might with their nuclear and conventional arsenals alike. More than ever now, Americans need real news, real information from around the globe, even from remote places like the Urals or the Balkans. After all, it’s in these out of the way places that major conflicts are often incubated. Needless to say, Americans are not getting it. The only media that is resourced and credentialed to provide this kind of service, the so called main stream media, is also singularly uninterested in doing so, Fox News Channel included. Ignoring reality is a luxury we simply don’t have. It’s time we shut out the shticksters and opened our eyes.

Video: Interview-Israel Will Seek To ‘Destroy’ Any Iranian Military Presence In Syria

No Silver Ballot: The Problems With A Donbas Referendum

Opinion From Across The Pond: Brexit Weakens Europe And Is Against US Interests