Confirmed by multiple social media posts, it seems clear that the U.S. State Department has turned over American diplomacy in the Balkans to the son of billionaire financier George Soros, Alex Soros. The heir to the socialist throne has been confirmed making at least nine trips over the last several months to meet Balkan leaders. These included President Aleksandar Vučić of Serbia, Prime Minster Ana Brnabić of Serbia, and the Prime Minister of Albania, Edi Rama, a Soros protege, and the President Hashim Thaçi of Kosovo. 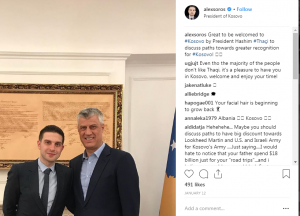 How The Soros State Department Destroyed Justice In Albania

The meetings are critical as the agenda shockingly enough is the exchange of territory between Serbia and Kosovo, which could cause serious ethnic conflict in the Balkans, an area which started two world wars in the last century.

The Soros organization is pushing hard for an ‘open borders’ regime in the Balkans, akin to a new Yugoslavia, controlled by Soros-installed leaders across the turbulent area.

The land exchange looks to involve the border city of Mitrovica, which is a very complicated issue. The town is majority Serbian and President Vucic would like to acquire the area in a possible exchange for recognition of Kosovo. The change would spark significant unrest in Kosovo, which looks at corruption of the Kosovar borders as the taking of their nation’s land. Kosovars see themselves as enjoying their own country, and the move would be seen in-country as a betrayal to the Kosovar people.

The American embassy in Albania has been pushing hard for the Soros regime, all the while openly flouting the Trump agenda. We wrote about that recently here. 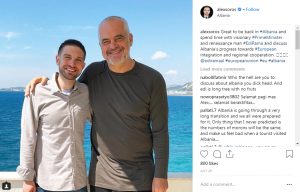 U.S. National Security Advisor John Bolton recently commented on the situation saying that the Trump administration would not interfere in discussions between Soros and Balkan leaders.

“The U.S. policy is that if the two parties can work it out between themselves and reach agreement, we don’t exclude territorial adjustments,” Bolton said.

Many European leaders, including Angela Merkel, are opposed to the idea of land exchange, fearing a ‘re-Balkanization’ of the region.