Korsi a traditional type of low table found in Iran

Iranians celebrate the arrival of winter with the Yalda festival. Yalda, or Shab-e Chelleh (“the night of Chelleh”) is an Iranian festival celebrated on the longest and darkest night of the year, marking the December 21 winter solstice. Yalda means birth, the renewal of the sun and the victory of light over darkness. The Yalda Night festival traditions include friends and family gathering together until well after midnight, to eat, and read poetry (especially Hafez – one of the most renowned Persian poets), telling stories and jokes, and for some, dancing. Nuts and fruits are eaten, of which pomegranates and watermelons are particularly significant as the red color in these fruits symbolizes the glow of life.

Yalda is celebrated in most parts of Iran, the extended families gathering and enjoying a fine dinner together. A wide variety of fruits and sweetmeats, specifically prepared or kept for this night, are traditionally served. These items and more are commonly placed on a Korsi (a traditional type of low table found in Iran, with a heater underneath it, and blankets thrown over it) which people sit around on the night of Chelleh. 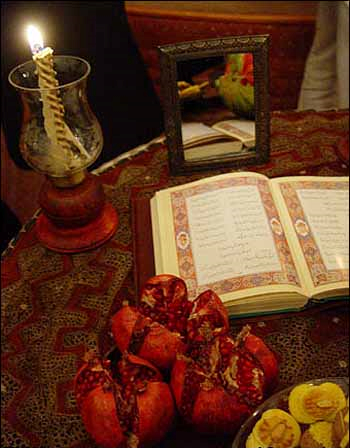 After dinner, the older individuals entertain the others by telling them tales and anecdotes while some of the party enjoy themselves dancing and singing.

Sadly, this year the people face a deteriorating economy, corruption, poverty, unemployment and mismanagement. The father of 4 children in Esfahan (center of Iran) said: “Yalda is just the darkest night for us now because we can buy nothing when a single Pistachio is 1000 Toman (almost 8 US cents).” He added, “And this while the Iranian nation’s wealth goes into warmongering, in Syria, Yemen, Iraq, on ballistic missile production and into the coffers of its corrupt officials.”

One local in Tehran said “Our economy is like a person who has all kinds of disease but no medicine available…the only medicine is regime change”.

“We are going to hold the Yalda traditional festival in shortage and contaminated water and with Sandstorm weather” one local in Ahvaz said, adding, “Our fellow workers are in the streets protesting unpaid wages, or in jail…A few days ago Authorities raided the homes of tens of our workers that led to the arrest of them. They were transferred to the unknown location”, he added.

In recent years security forces in Iran have regularly carried out raids on private parties celebrating the Yalda festival.

A few years ago the head of the Cultural Heritage, Handcrafts and Tourism Organization issued an order banning Yalda tours.

In conclusion, this year’s Yalda festival for the Iranian people, with 40% under the severe poverty line, holds no meaning unless it signifies that they are indeed currently suffering the longest and darkest period of their life and that better times are on their way.