A new map shows the location of recent attacks by Islamic State in Iraq. In July 2017 the Iraqi Security Forces liberated Mosul. In December they declared major operations finished. However in early July Baghdad launched an operation dubbed “Revenge of the Martyrs” to clear ISIS insurgents from areas around Kirkuk, Salahuddin and Diyala.
ISIS attacks in Iraq July 2018 (MECRA)

A close up shows their extent on the roads from Baghdad to Kirkuk and Mosul. This area of Hamrin mountains and rural villages have become the center of new ISIS operations. Some reports indicate ISIS controls 75 villages and that the ISF have sought to clear up to 175 villages. 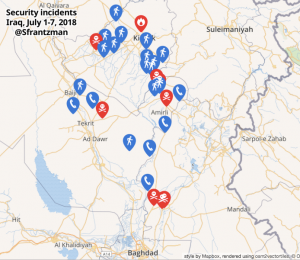