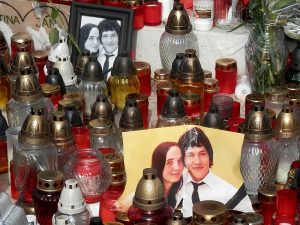 The shocking killing of a young Slovakian journalist investigating ties between an Italian organized crime network and the political establishment has transfixed the nation and set into motion a chain of events that may undermine the government.

Amid a welter of conspiracy theories, street protests and even a cameo appearance by billionaire philanthropist and conservative bugbear George Soros, Prime Minister Robert Fico’s populist coalition government is lashing out at its critics in a bid to hold on to power.

“This murder put political corruption into focus,” said Aneta Vilagi, a political scientist with Comenius University in Bratislava. “Many are of the point of view that this is too much. People actually lost their lives because somebody tried to hide this level of corruption. The effect is quite tremendous. It’s like an earthquake…”