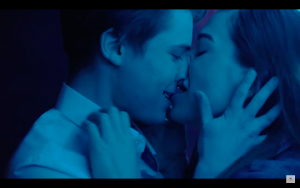 The Kremlin is pulling out all the stops to get young people to the polls this March 18th for Russian President Vladimir Putin’s election to a fourth term. In a ripoff of the famous Obama/McCain ad where the girl, in the middle of passionate throes, finds a flyer for McCain in the drawer and walks away, Kremlin PR firms use the same tactic.

“A video titled “Girl Rips This Guy Apart — 18+” appeared on YouTube on February 14. In the video, an attractive young woman catches a young man’s eye at a nightclub, and pulls him away to get hot and steamy. Just as the lip lock is getting underway, however, she suddenly asks him if he voted earlier in the day. When he scoffs and says no, she breaks their embrace and walks away, saying she thought he was an adult,” writes Meduza.

Although not specifically linked to the Putin campaign, the agenda is obvious.