On February 24th several members of the PMU reportedly came under attack from ISIS on a road from Kirkuk to Hawija in Iraq. It is unclear how many of the Hashd al-Shaabi or Shia militia fighters were killed. The attack comes amidst rumors of attacks on Kirkuk itself.

On the same day as the attack on the PMU, Al-Arabiya notes: “Commander of the second special operations in the Iraqi army, Maj. Gen. Maan al-Saadi, warned ISIS and Peshmerga forces on Friday that the national army will ‘crush’ anyone that approaches the outskirts of Kirkuk.”

I asked counter-terror expert Powel Wojcik to try to quantify the number of recent attacks. “There are 35 unique claims for February alone – Samarra, Tikrit, North Baghdad, Hawijah, southern and south-east Kirkuk, Diyala with January extending to Anbar, a lot or Ramadi, Fallujah, Mosul areas. From 35 February claims, 14 are related to Kirkuk and Hawijah.”

Alex Mello argued in a thread on Twitter on Feb. 25 “Past week was probably the deadliest for ISF since Mosul ended last summer. Ambushes & outpost overruns in Nimrud, Badush, Baaj, out in Rutbah and the massacre in rural Kirkuk, on top of slow burning rural assassination campaign targeting Sunnis leaders and tribal forces.”

I covered the battle for Hawija closely. I wrote about why it was important on Sept. 21, 2017, interviewed the coalition about it on October 1, and wrote a conclusion about it on October 5. After I wrote a thread in October 2017 about how the operation was timed to coincide with Iraq’s desire to take back Kirkuk into federal hands, which means it was rushed.

What follows is an attempt to track and map the recent uptick in attacks.

Attack in Kirkuk’s Musala “neighborhood was directed against an Iraqi counterterrorism convoy,” 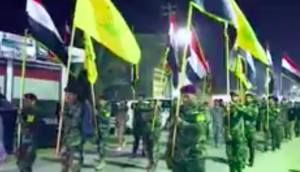 East of Hawija near Al-Riyadh ISIS claimed an ambush that killed up to 30 PMU, CNN reported the same. Claims PMU was “lured” into a trap and ISF didn’t coordinate; US embassy condemns attack

ISOF detains man wanted for assassinating a professor in Kirkuk

Operation against the “white flags” near Tuz

US comments about ISIS presence in Hawija, Daquq

Three ISIS killed in villages by PMU near Hawija

“The Major General Anwar al-Danouq was shot dead in the village of Tal Khadija, which is part of the Rashad administrative district and southwest of Kirkuk. Incident took place in one of the farms adjacent to the village.

ISIS claims it destroyed an electricity transmitter near Hawija

ISIS claims it killed 2 PMU in Al-Abassi near Hawija

Five villages “purged” of ISIS by PMU near Hawija