The folk and religious holiday of Maslenitsa in Russian and Orthodox societies celebrates the end of winter and the beginning of the 8 week fast of Lent. It is the oldest recorded Slavic holiday.

“During the week of Maslenitsa, meat is already forbidden to Orthodox Christians, and it is the last week during which eggs, milk, cheese and other dairy products are permitted, leading to its name of “Cheese-fare week” or “Crepe week”. The most characteristic food of Maslenitsa is bliny thin pancakes or crepes, made from the rich foods still allowed by the Orthodox tradition that week: butter, eggs and milk,” writes Wikipedia. 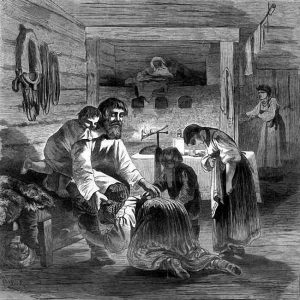 The Sunday of Forgiveness, Maslenitsa

This year, in the artistic colony of Nikola-Lenivets, 200 kilometers southwest of Moscow, where artists build projects made of brush, it has been customary to burn a large installation to celebrate the end of winter. This year the fire was lit at night to a thirty meter brush cathedral. The epic videos are below.