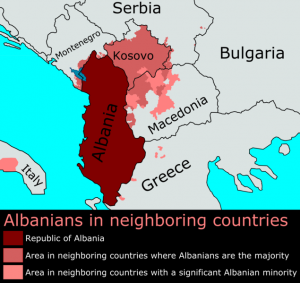 On 11 January, in the presence of 69 MPs in the Macedonian Parliament, the Law on the Use of Languages of Ethnic Communities was voted on, which promotes the official use of the Albanian language in all central government bodies.

The opposition party, VMRO-DPMNE, qualified the bill as unconstitutional and boycotted the vote coming out of the parliament room. There were also protests by a group of Macedonian citizens who opposed the adoption of this law, under the pretext that the law would endanger the Macedonian language. Although adopted in parliament the measure still has an obstacle, but is expected to be signed by the country’s president Gjorge Ivanov, who could return to parliament once again for review if there are objections to certain points. This law comes as a light of hope for a dignified coexistence among the citizens of a country with different nationalities. The law was also left free for decision-making bodies in municipalities where the Albanian population is less than 20 percent if they will approve its use for the Albanian population that may be at a lower percentage. According to the law: “In the local self-government units, the language and script used by at least 20% of citizens is the official language except for the Macedonian language and its Cyrillic alphabet. For the use of languages and alphabet used by less than 20% of citizens in local self-determination units, the bodies of local self-government units can decide to adopt it or not.”

The Albanian language will be used for the first time in government, both in spoken and written form. The same use of of Albanian will also be in the parliament, including the chair of the sessions if it is Albanian, but also in all other central government organs, public enterprises, agencies, and directories. According to the legislation, the official use of the Albanian language will be applied in all guidebooks of state institutions. The Albanian language will not be used in banknotes and army uniforms, but coalition government partners have reached agreement to use gold symbols to reflect Albanian symbols. Institutions are obliged to initially change names or inscriptions at the entrance of the institution within six months to write them alike in Albanian and Macedonian, with the same size and appearance. In addition, institutions and regional units are obliged to make their stamps in both languages.

One year after the entry into force of the law, institutions have to apply the changes completely. For those institutions that will not apply these legal changes, fines of 4 to 5 thousand Euros will be imposed. Whereas, officials or administrators who do not respect this principle will have 30% deducted from their salary. The adoption of the law on the use of the Albanian language in Macedonia comes after the dark historical past where Albanians were mistreated by the Macedonians because of their ethnicity. This is also the merit of Prime Minister Zoran Zarev who will enter history as the prime minister and the watchdog who, unlike his predecessor, Nikola Gruevski, helped Albanian citizens gain a denied right for decades.