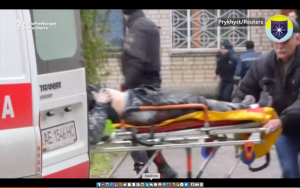 The father of a slain son detonated two hand grenades during a court session in the East Ukrainian town of Nikopol this week, killing the father and one of the three defendants. Two others on trial, along with multiple court workers and spectators were also injured and taken to local hospitals.

The 3 defendants were accused of killing the man’s son with automatic weapons in 2016 during a drive-by shooting, allegedly due to a struggle for drug trafficking territorial control, reported Reuters.

“At least nine people were wounded in Thursday’s explosion, including two convoy officers, a court officer, a prosecutor and civilians, police said. All the victims were transported to local hospitals with “shard injuries.” The man behind the blast is believed to be the father of one of the shooting victims at the centre of the trial, local reports indicated. He “died on the spot after the explosion,” local police said in the statement,” wrote Reuters.

As East Ukraine continues to be consumed by war with pro-Russian separatists in the Donbass region, and corruption in all levels of government continues to be rampant, the former Soviet state is descending into anarchy. Western international organizations have struggled to push Ukraine towards the rule-of-law and a democratic society, free of payoffs, violence, and graft.