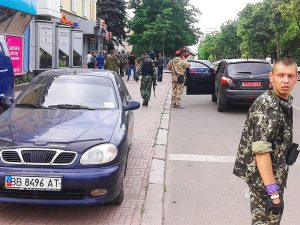 The leader of the self-proclaimed Luhansk People’s Republic (LPR), a pro-Russian rebel-held area in the Donbass region of East Ukraine, resigned today in an apparent successful coup. Igor Plotnitsky had attempted to remove Interior Minister Igor Kornet from duty, resulting in armed men and armored vehicles in the streets. The stand-off lasted four days.

“The influential minister refused to resign and enlisted help from the separatists in the neighboring Donetsk region to deny Plotnitsky’s order. Dozens of armed people loyal to Kornet blocked the access to the main administrative buildings in the regional capital, Luhansk, on Tuesday. A convoy of armed vehicles entered the city in the middle of the night in a show of support,” reported Associated Press.

State Security Minister Leonid Pasechnik announced Plotnitsky’s resignation and said he would take over running the territory in an acting capacity until an election was called.

The incident comes at a time when Russian President Vladimir Putin has made overtures to the West, President Trump in particular, to end the conflict. Some analysts suspect the conflict is becoming too expensive for Moscow and no longer useful.