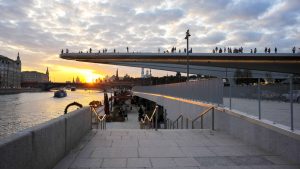 Moscow’s parks are famous for their over-the-top bling. Zaryadye, the first public park built in Moscow in over 50 years, was inaugurated a month ago. The park is divided into four climatic zones: forest, steppe, tundra, and floodplains. The 130,000 square meter park was built near the Kremlin on the site of former Rossiya hotel that had been torn down in 2006. One of the highlights of the park is an icy cave where the air temperature below 0 Centigrade will be maintained throughout the year and a hovering bridge rising to the height of fifty standards stories. Take a look at Moscow’s new must-see attraction…

US Sends Carrier Into Med To Counter Russia