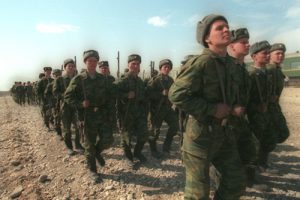 According to a new decree recently signed into law by Russian President Vladimir Putin, foreign soldiers serving in the Russian military can now be deployed and fight in overseas conflicts.

Foreigners have been allowed to enlist in the Russian army and Interior Ministry troops under a January 2015 decree, writes The Moscow Times.

Russia has many citizens of former Soviet republics serving in its armed forces. The previous iteration of this law was meant to legalize these soldiers, mainly in Armenia and Tajikistan. This new version of the measure allows overseas deployments for one year for contract soldiers and conscripts with more than one month left in service.

Russia has made great strides over the last decade in improving the quality of its military, mainly be relying on contract soldiers versus conscripts.

Russia declares it will have 70% of its armed forces outfitted with modernized equipment by the year 2020.