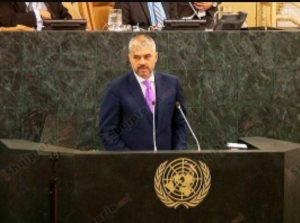 During the 72nd session of the U.N. General Assembly, Albanian Prime Minister Edi Rama started his speech stressing Albania’s determination in the war against ISIS and terrorism in general. He declared terrorism as one of the most problematic challenges facing mankind and promised the country will continue to perform its role in this global campaign in a consistent way.

The priority for Albania is integration in EU. Rama stated the country has to push through necessary reforms, the most important being the judicial system. Albania expects its European partners to open doors for membership negotiations. “We need the EU, but also the EU needs a more developed and stable Balkans,” Rama said. He asked the international community to treat all Balkan issues equally, including Kosovo, which should be part of international institutions.

Regarding the political situation in Albania, Rama stressed the need for a dialogue with the opposition, especially on the issue of electoral reform. However he stressed this is only possible through cooperation with all political factions, not on the basis of a ready made agenda offered by the Democratic Party.

Referring to the above-mentioned reform, there are three conditions important to the Democratic Party:

– reduction of the role of party leaders

Rama did not elaborate further into reforms, but maintained it’s time to get together for the country’s sake. Each party has its own approach, but now the priority is not to lose any more time with conflict between political adversaries.

During his stay in U.S., Rama gave an interview with VOA, where he shared the same topics and opinions as during his U.N. speech. When asked about the International Monetary Fund’s role in Albania, he answered, though not as strongly as before, the IMF role is still necessary through a new program and agreement.

In a meeting with Secretary General of U.N., Antonio Guterres, they exchanged opinions on development challenges. Secretary General congratulated Albania on its integration of stable development objectives in its national development strategy. The focus was the political situation and security of the Western Balkans, where Albania is adding stability. Rama took the chance to again to call on those governments that have not yet acknowledged the independence of Kosovo. (So far 114 countries have done so).

Rama also met U.S. President Trump. They appeared in a formal photo together; no details were given on discussions.

In the meantime, a reporter for Albania in the European Parliament, Knut Fleckenstein, was in Tirana, where he stated that Albanians deserve to have EU negotiations opened. He commented there are no extra conditions seen on integration, but negotiations will be opened only when Albanian reforms are made. The European Council is now responsible for this process, the decision to be made in March.