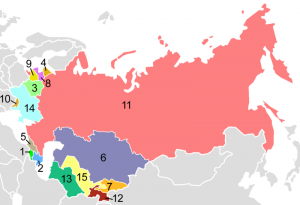 Russia settled the last outstanding debt of the Soviet Union with a $152 million payment to Bosnia-Herzegovina on Monday.

Kazakhstan Plans Big Changes Away From Its Soviet Past, Mapping Out A New Path For Central Asia
“The debt to Bosnia and Herzegovina in the amount of $152.2 mln was settled by the agreement between the Russian Government and the Council of Ministers of Bosnia and Herzegovina on settlement of liabilities of the former USSR under settlements related to turnover between the ex-USSR and the ex-SFRY [Socialist Federal Republic of Yugoslavia – TASS] signed in Moscow on March 21, 2017 and carried into effect on July 20, 2017. Russia settled the debt to Bosnia and Herzegovina by a single money payment on August 8,” the ministry said, reported Russian state news agency TASS.

Russia has also used innovative finance methods such a selling a portion of the state energy giant Rosneft to Qatar. It is rumored there is a repurchase agreement in place, which essentially makes the deal a long-term repo.

At this point the Russian Federation has very low sovereign debt and approximately half a trillion dollars in rainy-day funds; however, these funds are under pressure as Western sanctions and low oil prices drag on.