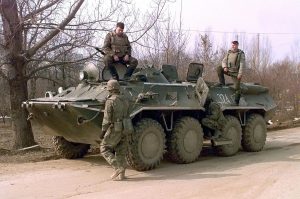 Russian troops in Abkhazia have completed live fire exercises that lasted one month, declared Russia’s Southern Military District Vadim Astafyev. The 1,000 troops were deployed from their base in Abkhazia to the Tsabal and Nagvalou firing ranges, located in forested and mountainous terrain.

The troops were simulating engaging lightly armored troops in movement at 1,000 meters and involved night vision training as well.

“Overall, the drills involved up to 200 pieces of military hardware, including BTR-82AM APCs, Kamaz Mustang armored trucks and communications vehicles based on the BTR-80 APCs,” wrote TASS.

Tillerson Says Russia ‘A Danger,’ Must Be Held Accountable For Its Actions