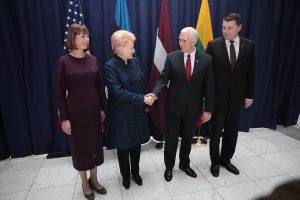 U.S. Vice President, Mike Pence, pledged to the Baltic nations of NATO that America would defend the Region from any Russian aggression, thereby reaffirming America’s pledge to the Article 5 collective defense provisions of the alliance treaty. An audible sigh of relief was heard across Northern Europe.

“Under President Donald Trump, the United States stands firmly behind our Article 5 pledge of mutual defense — an attack on one of us is an attack on us all,” Pence told reporters after meeting with the presidents of Estonia, Latvia and Lithuania in the Estonian capital of Tallinn, reported Associated Press.

Pence also stressed trade with the region and declared President Trump “knows security is the foundation of our prosperity.”

The Vice President will also visit the nation of Georgia in the Caucasus and new NATO member Montenegro. Georgia has been dealing with encroachment on its land by Russian troops and Montenegro went through a particularly tough period before being accepted into the alliance.

Russia Is Stockpiling Gold In Advance Of Further US Sanctions