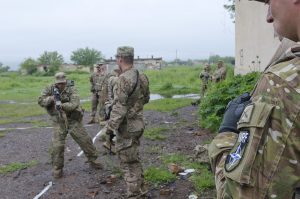 The former Soviet republic of Georgia is locked in a tense battle with the Russian Federation to be able to control their own destiny. After the Russo-Georgian war of 2008, the tiny nation in the Caucasus lost the two regions of South Ossetia and Abkhazia, where Russia has stationed troops ever since. Joining the North Atlantic Treaty Alliance has been a dream of Tbilisi for some time.

As recent as a few weeks ago, Russian troops moved border markers further into Georgia from the breakaway territories in a further grab of territory.

Another two week joint exercise, led by the United States, and with six other partner countries commenced prior to Vice President Pence’s arrival to meet with the Georgian government.

“These exercises will help Georgia to get closer to NATO standards and to strengthen stability in the whole region,” said the Georgian Prime Minister Giorgi Kvirikashvili.

“This exercise is not directed against any country. It’s about to help Georgia to grow its capacity to interoperate in international operations,” U.S. Ambassador Ian Kelly told Reuters.