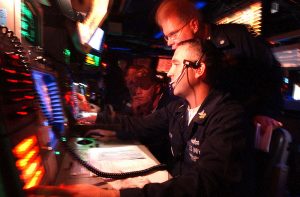 U.S. Secretary of State Rex Tillerson has said prior to the G20 meeting in Hamburg, Germany that the U.S. military would be open to working with Russia to stabilize Syria and even jointly enforce no-fly zones in the region. The statement, coming prior to the gathering of world leaders, could be a harbinger of a change in American policy to work more closely with the Kremlin to settle the war in the Middle East.

“If our two countries work together to establish stability on the ground, it will lay a foundation for progress on the settlement of Syria’s political future,” Tillerson said in a statement ahead of this week’s Group of 20 summit in Germany, reported Reuters.

The use of on-the-ground ceasefire observers and the coordinated delivery of humanitarian aid to Syrians would also be open to discussion according to Tillerson.

The Secretary also made clear it is Russia’s responsibility to force Syria to not use chemical weapons.

President Donald Trump meets with Russian President Vladimir Putin on the sidelines of the G20; the Kremlin has said it will be an ‘in-depth’ meeting.