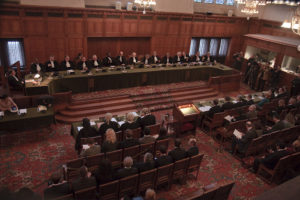 Judges at the International Court of Justice at The Hague will rule today in a case brought by Ukraine against Russia for the simmering conflict in East Ukraine and the annexation of the Crimean Peninsula. Judges could issue the ruling at any moment now in Ukraine’s request for ’emergency measures’ against Russia.

Ukraine has asked the court to halt Russia’s alleged funnelling of money, arms, and personnel into Ukraine’s war-torn east, and order Moscow to halt what it calls “racial discrimination” against minority groups in the Russian-occupied Crimea peninsula, particularly against its Tatar population, reports AFP.

Ukraine accuses Russia of violating the Terrorism Financing Convention and ‘supporting terrorism’ by supporting the pro-Russian rebels in Donbass with weapons, financial support, and even joining in the fighting against Ukrainian armed forces. Ukraine provided evidence of bombing and shelling civilians and the famous downing of flight MH-17 by a BUK missile system provided to the rebels by Russia.

The conflict has gone on for over three years and over 10,000 people have been killed. Russia annexed Crimea in 2014 and Ukraine alleges it is looking to do the same in Novorossiya, or New Russia in East Ukraine.