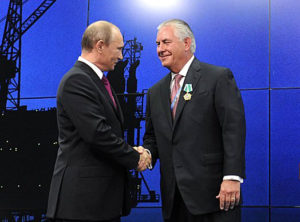 “Europeans and, I hope, Americans confirm it. I am saying – I hope, because as yet the U.S. team, which will be dealing with Ukraine, has not been formed,” Lavrov said in an interview with NTV on Sunday, reports Russian state news agency TASS.

“In near time, I am most probable to have a contact with the new US Secretary of State Rex Tillerson, and we, of course, will discuss these (issues related to Ukraine – TASS) and other major topics on the international agenda, as well as aspects of our bilateral relations.”

“I hope, the not too strong sprouts of understanding about what is really happening in Ukraine’s east would be developing.”

Russian Foreign Ministry spokesperson, Maria Zakharova, said that the two senior diplomats may meet in Bonn during an upcoming G20 international forum in mid-February. Following the G20 is an annual Munich Security Conference.