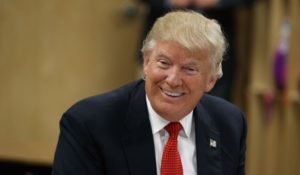 As a former military officer, I learned decades ago that when taking command of new unit, an officer has to be a strict disciplinarian. Rules have to be enforced and your subordinates need to respect and understand you are a determined person who takes your oath of office seriously. In reality, these first few months are a negotiation with your troops. First impressions count, they set the stage for your entire command.

Anyone who has followed this 2016 election cycle should know that Donald Trump is always negotiating. When the GOP nominee was talking about preventing Muslims from coming into the country “until we can figure out what is going on,” he was laying out a hard-line negotiating position that could be softened down the road if need be.

When he talks of deporting 12 million illegal immigrants, he is doing the same thing. Now amid hints of possibly softening that stand, he is seen as moderating and appeals to a larger swath of the electorate. I believe Mr. Trump will do the right thing for America when it comes to immigration, but the point is a negotiator starts negotiating long before the media spotlight highlights the actual bargaining begins.

I think Mr. Trump is doing the same thing with Russian President Vladimir Putin. He is laying the groundwork for what he believes will be future success dealing with Moscow. Mr. Trump has spent time in Russia. He has done business with Russians. He understands how they think. He understands they respect strength, not weakness. He understands they also want to be respected. Mr. Trump’s comments complimenting Mr. Putin as a strong leader “in a different system” are stroking the Russian president’s ego at a time when it will do the most good. The liberal media have freaked out because Mr. Trump refuses to follow the Obama administration line on Russia, but all he is doing is speaking nicely while carrying a big stick.

Mr. Putin has spent a lot of energy recasting the United States as Russia’s No. 1 enemy. Think about it — now that Mr. Trump is very popular among the Russian population, which for the most part yearns for peace just as Americans do, it will be more difficult for the Kremlin to cast America as an existential threat to the Motherland when Mr. Trump is in the White House.

Russians have a 1,000-year-old paranoia regarding the West. They have a deep need to be respected and a desire for prestige. Mr. Trump is playing to those psychological needs. He’s not being naively gushing like George W. Bush, or incompetently appeasing the Russians as Hillary Clinton and President Obama have repeatedly done. He is not narcissistically demeaning Russia is a third-rate power that doesn’t make anything, as our president has insinuated. He’s not making fun of Mr. Putin’s slouch. He is treating the Russian president as a leader worthy of respect, while at the same time looking out for the best interests of the United States.

Mr. Trump has not said he will surrender Western principles or values in the face of future Russian aggression. On the contrary, he wants to rebuild the U.S. military “so that no one will dare mess with us.” That has to give the Kremlin and the oligarchs pause. In the long run, rebuilding our hard and soft power at home will do more to enhance our national security than making promises we can’t or won’t keep. Our government owes $20 trillion, for heaven’s sake.

Mr. Trump’s comments on NATO members paying their fair share for defense are also spot on. The truth is that we do not have an alliance if all the other countries rely on the American nuclear umbrella while attacking our companies for monopolistic practices and tax violations in their own courts. Oh, the hypocrisy!

Russia belongs at the geopolitical table as a great power. Its history demands that. Mr. Trump is certainly aware of this and, by publicly acknowledging the fact, has cleverly already put down the opening marker in his negotiations with Mr. Putin. Mr. Trump’s not being what Lenin once called a “useful idiot” for Russia. He’s simply working the art of the deal.

Gorbachev Urges Putin And Obama To Meet Over Ukraine