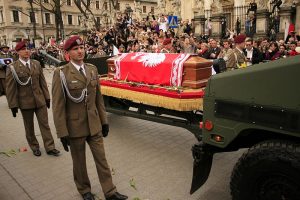 The Polish government in power has long suspected Russia was behind the plane crash in 2010 that killed Polish President Lech Kaczynski and 95 others. The Law and Justice Party has claimed explosives brought down the aircraft and have exhumed the bodies to reinvestigate the crash. Russia has never turned over the wreckage of the aircraft for examination from the crash near the western Russian city of Smolensk.

Kaczynski’s twin brother, Jaroslaw, who leads the Law and Justice (PiS) party which took power in 2015, took the lead in reopening the investigation. The party claims the centrist government in power at the time did not investigate the crash properly and blamed pilot error for the mishap.

Today Poland announced they had found body parts from people other than the president in his coffin; the same result was found in 11 other coffins examined from the victims. 24 graves were exhumed.

“Deputy Prosecutor General Marek Pasionek told reporters that in 12 of 24 coffins reopened since last year, bodies had been swapped in two, one contained half the body of another person while nine other caskets held scattered remains of other victims. He said the coffin of Archbishop Miron Chodakowski contained only the upper half of his body while the lower half belonged to late General Tadeusz Ploski. In the coffin of General Bronislaw Kwiatkowski there were 14 body parts belonging to seven other people, Pasionek said, adding that post-mortems would be finished by April next year,” reports Reuters.

“Today we know that there was no diligence in (the post mortems conducted in Russia). There was nonchalance in the best case, and ill-will in the worst case,” Magdalena Merta, the widow of Tomasz Merta, a senior culture ministry official who died in the crash, told the Polish state agency PAP.

She accused Russia of “displaying a filthy attitude towards our dead,” wrote Reuters.