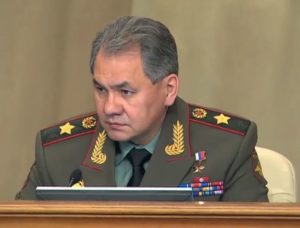 Russian Defense Minister Sergei Shoigu, while delivering a lecture in Moscow, said the Kremlin wants to avoid an arms race and will shift its focus to conventional, precision guided, munitions. The reference to an arms race seems to be referring to President-elect Donald Trump’s earlier comments that the U.S. would not be left behind in such a competition.

“By 2021, we plan to more than quadruple the combat capabilities of our strategic conventional forces, which will fully meet the demands of [Russia’s] conventional deterrence,” Shoigu said, reported The Moscow Times.

Shoigu added that Russia will focus on warships and submarines to deliver these advanced munitions. Russia has recently showcased such a capability by firing sea-launched weapons from the Caspian and Mediterranean Seas at Middle Eastern targets. The Kremlin also used long-range bombers launched from Russia territory and Iran to attack the Syrian opposition and Islamic State.

It remains to be seen if the Kremlin plans to scale back the large scale nuclear modernization effort it has underway. This seems doubtful in light of Russia’s historic dependence on nuclear forces for deterrence.