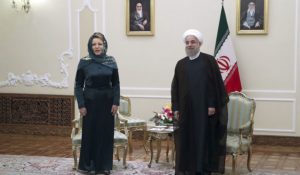 We have been writing for some time that we expect Iran, with its new-found billions courtesy of the Obama administration, to embark on an arms-buying spree from Russia. RIA reports in Moscow on Monday that Russia and Iran are discussing the delivery of T-90 tanks, artillery, planes and helicopters.

Viktor Ozerov, head of the defense and security committee in the Russian Federation Council, told the press Monday that talks are ongoing during a current parliamentary visit to the Islamic Republic, reports Reuters.

The Obama administration released approximately $150 billion to the Islamic theocracy during the so-called Iran deal, which is supposed to delay Iran from obtaining nuclear weapons. In actuality, all the agreement did was fund Iran’s weapons desires and enrich the Kremlin, helping Russian President Vladimir Putin stave off the effects of Western sanctions over the annexation of the Crimean Peninsula from Ukraine in 2014.
Iran’s conventional forces are in shambles from the Iraq-Iran war and global United Nations sanctions, due to its support of terrorism around the world. It looks like President Obama found a way to alleviate this problem for the world’s largest sponsor of terrorism.

MIG-29 Crashes Upon Takeoff From Russian Aircraft Carrier In Med

Trump And Putin: We’re Ready To Destroy ISIS Together

East Ukraine Could Be Annexed Soon