Members of the Rojava Peshmerga on the road from Rabia to Snune in December 2015 (Seth J. Frantzman)

The long, lonely road from Dohuk in the Kurdistan region to Sinjar, the site of the ISIS genocide of Yazidis, is symbolic of Iraq’s recent tragedies. It passes villages and towns destroyed in fighting with ISIS. A patchwork of different armed groups have also struggled for control of it over the last years. From 2015 to 2017 a group of Kurdish fighters known as the Rojava Peshmerga controlled part of the road. Today some in the US thinks these men might help forestall a crisis with Turkey. It appears that in consultations with the SDF and the Kurdistan Regional Government some of these men were deployed to eastern Syria, according to comments by US envoy James Jeffrey at The Atlantic Council on Monday, December 17.

The Hi-Tech Traditionalist: Is America’s Military Loyal To Its Commander In Chief?

Turkey has said it will launch an operation in eastern Syria against the Kurdish People’s Protection Units (YPG), a group Turkey views as terrorists connected to the Kurdistan Workers Party (PKK). “We say once again that we will not allow a terror corridor along Turkey’s borders,” Turkish President Recept Tayyip Erdogan said on Tuesday.

The US has partnered with the Syrian Democratic Forces (SDF), an umbrella group that includes the YPG. The US says it’s working with the SDF primarily to defeat ISIS and Jeffrey has said that this is a temporary relationship. The SDF are the key fighters that are helping defeat ISIS. They are also played a central role in saving thousands of Yazidis from ISIS in 2014 when they intervened in Sinjar to help Yazidis escape. Now the key role in eastern Syria is is being challenged by Turkey which promises that in “coming days” it will launch an operation in eastern Turkey along with Syrian rebel allies to “cleanse” the border of the YPG. US envoy to Syria James Jeffrey spoke at the Atlantic Council on December 17, saying that there is a “deployment of the Rojava Peshmerga across the border, that was done with our understanding and the understanding of the SDF, that is one of the various steps being taken.” Currently this deployment consists of only dozens of these men. But who are they and why are they important?

I met the Rojava Peshmerga in December 2015 on the way to Sinjar. At the time these men were doing checkpoint duty along dozens of kilometers of the lonely road from Rabia to Snune. A Lt. Col. from the unit said his regiment controlled 30km of road. “We are from Rojava [eastern Syria’s Kurdish region] and have taken parts in battles near Mosul, Rabia and Sinjar,” he said. As the men warmed themselves by a small heater and drank sweet tea, the officer described how his men included two brigades of fighters. He described them as refugees who had fled to northern Iraq in the early years of the Syrian civil war. They were Kurds, persecuted by the Syrian regime. “We grew up under Assad, it was very difficult because we had no citizenship. We had no rights. We couldn’t even speak Kurdish.” Many of these men, stateless because Syria had denied them citizenship, came to northern Iraq’s autonomous Kurdish region to live a normal life. “We couldn’t even get married in a court, I had to marry through a mullah [Islamic religious leader].”

As the war developed in Syria the YPG came to control Kurdish areas in what Kurds call Rojava, but some Syrian Kurds who had already fled to Iraq opposed the left-leaning YPG and wanted to join units more closely connected to the Kurdistan Democratic Party (KDP) which leads the Kurdish region in Iraq. “It’s worse now in Syria, the Kurds have nothing, “ the Rojava Peshmerga members said in 2015. They complained that the YPG was too close to the Assad regime. They also complained of economic uncertainty, rising prices in Rojava and also that some of their land was confiscated. They said this was due to political reasons.

Desiring to fight ISIS, the Rojava Peshmerga sought to prevent ISIS sleeper cells from infiltrating back into northern Iraq and after the battles around Rabia were given the task of guarding the road. This, perhaps purposely from the KRG’s point of view, put them next to a sector controlled by the YPG and PKK at the border of Syria near SInjar. The Rojava Peshmerga clashed several times with PKK and YPG members in some Yazidi villages near Sinjar, particularly in and around Snune. Four Rojava Peshmerga were wounded in March 2017 clashes. They were very critical of YPG policies and along that lonely road they patrolled within eyesight of the Syrian border, but unable to cross. Many of the members of the unit interviewed in 2015-2016 said they supported Kurdistan and some of them said they hoped one day to see an independent state. This was in line with the KRG’s policies in the leadup to the Independence Referendum in September 2017. The KRG’s official stance has now changed and the leadership has sought to work with Baghdad again. 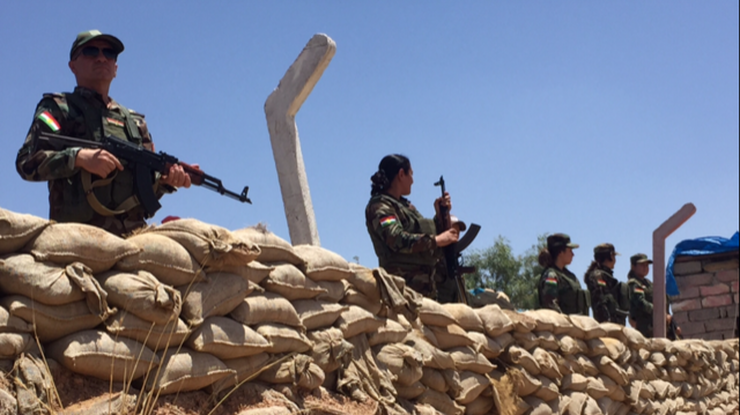 Members of the Rojava Peshmerga guardian a road near Mosul Dam, including members of the women’s unit in June 2016 (Seth J. Frantzman)

In June 2016 another group of Rojava Peshmerga were posted near Mosul dam, including some women who had joined an all-women’s unit. Their job was to guard the road near the dam. One of the male commanders said he had lived in Iraq since the Syrian conflict began in 2012. The women told similar stories. They said they had fled Syria during the war in 2012. They preferred to join a Peshmerga unit as opposed to the YPG because they said the YPG-affiliated women’s units didn’t allow fighters to marry. “It is our land [in Syria] and we want to return to Rojava after ISIS is defeated.” The women were also harshly critical of the YPG and PYD, accusing them of taking their lands and keeping other political parties from eastern Syria. “The international community is working with the YPG to solve the problem and let us go back.” They said that Brett McGurk, the US anti-ISIS envoy, had been involved in these discussions. “We went three times to Faishkhabur [the border crossing with Syria] and the YGP said we couldn’t come.” One of the women, her AK-47 by her side, said “we don’t want to end up as housewives back in Syria, we want to protect and live on our land.” According to the women’s unit at Mosul Dam, by 2016 there were 5,000 members of the Rojava Peshmerga.

Since 2016 these fighters have increasingly wanted to return to eastern Syria. “We are ready to go back to our land.” The women estimated at the time it would take three more years to defeat ISIS and they hoped to play a role. But they were concerned about the YPG’s policies, which they characterized as being too close to Iran and being too confrontational with other Kurdish political parties. They said the economy in Rojava had been harmed and that Kurds had also been forced off their land. “We want the whole world to know that we exist and we fight and we want to go back to fight the extremists.”

After more four years fighting ISIS and working alongside the US-led international Coalition, the situation in eastern Syria is now facing a new crisis. Turkey’s President asserted on December 12 that there was no ISIS threat in Syria and that “we are determined to turn the east of the Euphrates into a peaceful and livable place for its true owners.” Turkey will not allow a “terror corridor” along its border Erdogan said on Tuesday. The US has sought to downplay Turkey’s continued claims that it will launch an attack, with US President Donald Trump calling Recep Tayyip Erdogan and Turkey claiming the US made concessions on Syria and on other issues.

Concerns about what comes next have been felt in Washington and also in Erbil, the capital of the Kurdish region of Iraq. Former Kurdistan Regional Government President Masoud Barzani met with US anti-ISIS envoy McGurk, US Ambassador to Iraq Douglas Silliman and US State Department advisor William Roebuck and Consul General Steve Fagin on Monday. According to Kurdistan24, Barzani expressed concern about threats to the Kurds in eastern Syria. Meanwhile Jeffrey was speaking at the Atlantic Council in Washington where he hinted at the deployment of the Rojava Peshmerga.

The Rojava Peshmerga are now at the heart of a complex political balancing act between Washington and Ankara. For years they were prevented from returning to eastern Syria because they are linked to the Syria’s Kurdish National Council, a group of Kurdish political parties that are closer to the KDP and the Patriotic Union of Kurdistan (PUK). The YPG has periodically shut down and raided in eastern Syria, according to their members who relocated to Iraq.

The YPG’s political branch, the PYD, has been criticized for stifling other political opposition groups in eastern Syria. Turkey also views the YPG as terrorists and Ankara has historically had more amicable relations with the KDP. This means that some think the presence of the Rojava Peshmerga would be more palatable to Turkey. But a handful of Rojava Peshmerga deployed near posts of YPG or SDF members isn’t likely to change Ankara’s view. Turkey launched airstrikes against the YPG in Iraq’s Sinjar in April 2017, killing five Peshmerga by mistake. It’s also not clear how a few Peshmerga will change Turkey’s calculations since the government structure of eastern Syria will remain in the hands of groups that Turkey views as terrorists and Ankara’s main concern is not just a few posts along the border but accusations that the US is investing in a “stabilization” force in eastern Syria made up of SDF members.

The Rojava Peshmerga have sought for three years to return. Now it remains to be seen if their potential return to Syria will be as pawns in a complex game between Washington and Ankara, involving complex intra-Kurdish politics, or if they will get to fulfill their demand of coming back to their homes and serving in Syria where they are from.

How Much More Evidence Do You Need That Turkey Doesn’t Belong In NATO? Get The Nukes Out!