One of Madani’s tweets (Screenshot)

MECRA spoke with Samir Madani who runs an online service with Lisa Ward that tracks tankers. Crude oil tankers departing from Iran have been “cloaking” their movements by turning off their AIS transponders that publicly geolocate vessels.

The US is seeking to push Iranian oil exports to near zero, according to US Secretary of State Mike Pompeo’s statements in July. In September Pompeo said that the US would consider some waivers, but “our expectation that the purchases of Iranian crude oil will go to zero from every country or sanctions will be imposed.” Iran’s oil exports reached 2.7 million barrels per day (bpd) in May, the largest since the Iran deal in 2015. In May US President Donald Trump announced the US was leaving the Iran deal. Around 1.8 million bpd was heading to Asian state customers from Iran. Washington now threatenes those importers, such as China, with sanctions. Between June and August the US also sought to work with India, which imports oil from Iran.

In the lead-up to the sanctions Iran is seeking to profit and work with its customers. For instance it is thought that Iran’s exports are declining below the 2.06 million bpd it was doing in August. China switched to using Iranian tankers as a way to sidestep sanctions, Reuters reported. The National Iranian Oil Co was also slashing prices. The exports are supposed to slip even more to 700,000 bpd.

Samir Madani, the subject of this interview, is the co-founder of TankerTrackers.com.

Can you describe, in basic terms, what you do and how you’re able to track tankers? How long have you been doing this?

Since early 2016, Lisa Ward and I (Samir Madani) have been tracking crude oil tankers in order to help oil traders on Twitter. This was done as part of our #OOTT initiative (The Hashtag Organization of Oil-Trading Tweeters). This year we took things further by turning it into a career path instead of a very late night hobby which we lost a lot of sleep over. We have been offering our services since late July 2018 at a premium of only $19.99/month.

Can you describe your focus on Iran in contrast with your overall work?

As we track each country’s crude oil exports manually (no automation involved), we focus only on the hotspots that end up in the news over and over again. Iran used to be a country we could track in a matter of minutes each day, but now it takes up the most part of the day on account of the vessels that cloak their movements by switching off their AIS transponders; devices that publicly geolocate vessels on websites such as MarineTraffic.

What kind of changes have you seen in how Iran’s tankers operate?

Just two months ago, we would spot roughly (at most) 2-3 tankers cloak either the departure out of Iran or the arrival into (for example), Syria. Fast-forward to October, and less than a handful of departures are publicly visible while the majority are not as the unilateral US sanctions are now only less than 3 weeks away.

Compare to other countries or entities that may also be hiding their tankers, or doing illicit business, would you say that Iran is prominent in terms of numbers in doing this?

As an exporter, they’re now hiding pretty much (in proportion, at least) as many departures as Israel is hiding arrivals/imports from various countries like Russia, Angola, Congo, Nigeria, Azerbaijan and the Kurdistan region of northern Iraq via Turkey.

These tankers are supposed to keep their transponders on, is there any reason besides something illicit that would cause them to turn it off?

We noticed these activities pick up pace as the price of oil was breaching $80 Brent, as it benefits Iran if the world thinks they’re shipping less than they are. The price goes up on account of a fear of fewer barrels out on the market, while their shipments remain steady.

Are companies or countries ever punished for this practice of turning off transponders?

We haven’t seen such cases, but can imagine that insurance companies aren’t too thrilled about it because it would void the insurance coverage in case of an accident out at sea.

You describe Iran’s behavior as a change, can you describe how this change has taken place and how you noticed it?

It’s an evolving story. One day you notice a tanker go in but not come out, so you wait another day and still nothing. Then you look at the export terminal with a satellite and see the tanker’s no longer there. A couple of days later, it pops up off the east coast of the UAE and it all becomes obvious. Today, nearly the entire fleet is working in this manner in order to throw off the trackers. During the first half of October, we were able to verify 2.2 million barrels per day over a 13 day period, but some others only got slightly more than half that amount as they do not use tools such as satellite imagery.

There are a number of satellite imagery companies nowadays, but when tracking movements, you want to use a network of satellites that photograph daily instead of weekly. We use Planet Labs (http://Planet.com)

Iran benefits in a roundabout way by having the media stress that their exports are down and thus raising the price of oil. So in your estimate are their exports the same as before?

Yes, anything above 2 million barrels per day at these prices is a bonus for Iran.

As the sanctions begin to kick in do you foresee this process increasing, and can you walk us through how Iran will try to avoid sanctions through hiding its tankers?

A lot has changed since the previous sanctions in terms of technology. Unless their fleet understands that, their current methods are becoming simpler to work with from our perspective. We can say however, that they left quite an impression on us given the high level of care they place into avoiding detection. At the end of the day though, everyone leaves a cookie trail in some way or another.

Can you explain how Iran does business with tankers fueling at its port(s), are these tankers owned by private companies, Iranian companies, or foreign tanker operators?

These tankers belong to the NITC; National Iranian Tanker Company; which is state owned. The majority of them carry the Panamanian flag of convenience (FOC).

Do you think this is coordinated directly from Iran or that there is a kind of unwritten understanding about this illicit trade?

NITC coordinates all the directives of what vessels need to do. It is then the experience of each vessel captain to decide where and when to manipulate the AIS. We must remember that there are safety aspects they need to weigh in, however we have seen that they can be extremely neglectful when sailing through populated waters such as the Strait of Hormuz. As for “illicit”, we must also keep in mind that these are unilateral US sanctions (and not by the UN this time), and as long as there are a few large importers of Iranian oil such as China, India, Turkey and the EU who still want to be importing their oil, they will try to continue to do so. China and Turkey seem adamant at continuing while India is voicing their need for a waiver. EU is trying to set up a new legal entity that can circumvent the sanctions.

In your work have you been able to total up the main recipients of Iranian oil?

Absolutely. Here’s what we have from September. 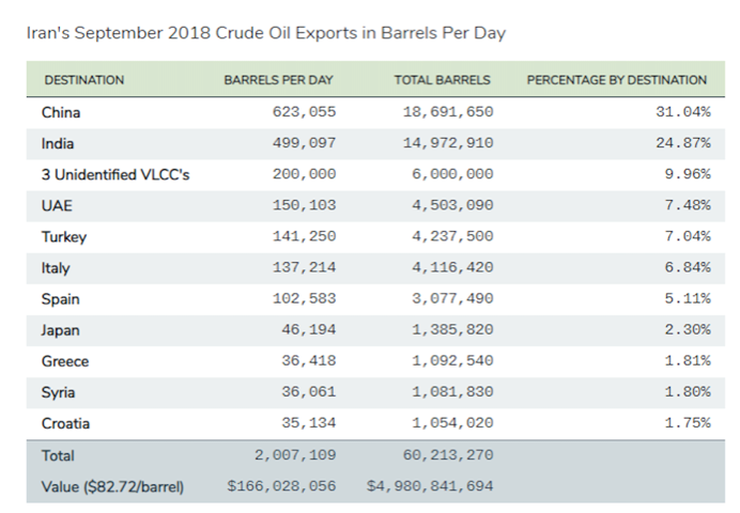 A look at where Iran is shipping its oil (Courtesy S. Madani)

As you can see, China and India came out fairly high, with India at around half a million barrels a day. The UAE (mostly important gas condensates while also re-exporting crude oil) and Turkey followed thereafter. The European Union represented here by Italy, Spain, Greece and Croation amounted to 311,349 barrels per day, which is 15% of the total. Here is a map of all the vessels we tracked during the month.

Have you been able to create a kind of database and list of ships and companies engaging in what appears to be this illicit business with Iran?

At this stage, it is too soon to call anything illicit as the sanctions haven’t kicked in yet (Nov 4). Our focus now is on profiling the NITC tanker fleet as we track them visually by satellite when AIS is not available.

Samir Madani, the subject of this interview, is the co-founder of TankerTrackers.com