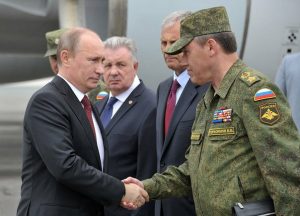 Russia doesn’t make much, but they do make really good weapons. In fact, one of the purposes of Russian involvement in the civil war in Syria, in addition to preserving Russian influence in the region, was to promote Russian military technology. The entire conflict has been one big infomercial for the Kremlin’s weapons bazaar for the world to see. Moscow has reaped billions in sales to Iran, Turkey and other sovereign customers. This development is what makes the possible use of force by the Trump White House over Bashir Assad’s alleged chemical weapons use against civilians so interesting.

The scenario will be a public showdown between Russian and American technology, military prowess. Russian President Vladimir Putin has made huge progress in restoring Russian influence in the Middle East and around the world by showcasing a new and improved Russian military, replete with modern equipment and training. No longer the decrepit Soviet army of conscripts that saw more abuse and hazing than professional management.

We will soon see if that narrative will hold up.

There was a reason the Kremlin did not publicize or retaliate against the slaughter of Russian mercenaries by American air power several weeks ago — the public perception of Americans easily killing Russians is not one Moscow wants to publicize, and perhaps the Kremlin wanted the Wagner forces to be removed as an irritant.

This Syria effort will be much different.

It will be interesting to see if they work against American cruise missiles and stealth aircraft.

If they don’t, Moscow will be in trouble. If they do, Mr. Trump will have an argument for further U.S. military spending and research and development.