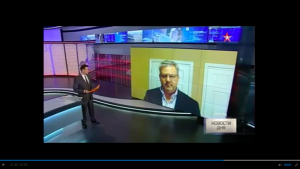 Tsarizm.com editor-in-chief L Todd Wood appeared on Zvezda TV recently in Moscow to discuss the case of dismissed U.S. National Security Advisor General Michael Flynn. Was it Flynn’s push to cooperate with Moscow in the fight against the Islamic State in Syria (ISIS) that was the cause for his firing?

Wood described the globalist effort to bring down the Trump administration and the hysteria over the supposed Trump-Russia connection and how it related to Flynn’s dismissal. He said the US will adhere to its principles in Eastern Europe and elsewhere, and that the US and Russia had major differences; however, Wood emphasized that where we have a common enemy, such as the Islamic State, we should find ways to work together.

Keeping Greek Identity In The Southern Caucasus Of Georgia