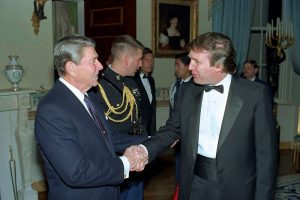 I can remember the wailing and gnashing of teeth in Europe as President Ronald Reagan deployed medium-range nuclear missiles into Western Europe to counter the Soviet threat. I can remember the name-calling, the “Ronald Ray Guns,” the stupid American cowboy references. The leftists of Europe and the United States threw everything, including the kitchen sink, at the Great Communicator. However, the simple fact remains for history’s judgment — Reagan was right.

And because Reagan was right, the West was able to survive for another generation or two. Today, I am not so sure.
As President Trump visits Davos, Switzerland, I have a deja vu kind of feeling that we are experiencing a rerun of a past era in dealing with foreign leaders. As was true during the 1970s and 1980s, much of the West has lost the will to defend itself, to defend its culture, even to defend its people.

Leftists filled the streets to protest Reagan’s rearmament of America and NATO. As happened in the world wars and the fight against radical Islamic terrorism and unchecked immigration, Europe could not defend its own territory — or its women.

Before Mr. Trump came along, NATO was a shell of its former self, with most European countries contributing a paltry 1 percent of their national budgets to their own defense. I don’t know what it is about the Europeans’ mind-set — for some reason, after a generation or two, they lose all will to keep their culture, their freedom, or their way of life alive.

Mr. Trump has recognized this. He has also shown a leadership that has shamed the Europeans into taking their own security seriously. European defense budgets are starting to rise, even though it is nowhere near where spending should be.

What we do know is that the left, especially in America, is corrupt. All the recent revelations about the FBI show this in black and white.

I am not appeasing Russia. I think the Kremlin did try to interfere in our elections — not to elect Mr. Trump, but to disrupt our way of life and undermine our democratic system. This behavior has to be confronted. NATO’s borders have to be defended.

However, the Russia hysteria has to stop. Russia has the most nuclear weapons in the world. It is time to realize that the Russophobia in the press is for the most part manufactured to help the Democrats, leftists, Obama bitter-enders, whatever you want to call them, regain power. It has nothing to do with President Vladimir Putin, the Kremlin or any threat posed by the Russian people.

Reagan was a legend. He saved America. He saved the West. He saved our future.

Perhaps it is time that the American public realize Mr. Trump is cut from the same cloth. You may not like him, but he is saving your way of life, your prosperity, no matter if you are black or white.

The people lined the streets to see Reagan’s body pass by as it made its way home to California. My prediction: They will do the same for Mr. Trump when his time comes.