Does Russian President Vladimir Putin consider himself to be the savior of Russia? Blessed by God himself?

Many analysts have been intrigued by the Russian leader’s adherence to, and fascination with the Russian Orthodox Church. Putin has declared himself to be a true believer, and very much goes through the paces to seem so. 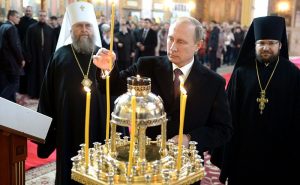 Kremlin watchers around the world were vexed as to why the Russian President had not attended the ferociously important Russian World Cup match where the home team scored a victory over France. Everyone was sure Putin would be watching the game with French President Emmanuel Macron. However, it was not to be so…the speculation mounted.

However, now we know the reason why. The Russian president was at that moment preparing for a very important event for him personally — the next morning, he attended a liturgy in a monastery on the island of Valaam, 1000 kilometers from Moscow, reported The Bell.

The president, unofficially, has his own priest — Bishop Tikhon Shevkunov. But the main subjects of gossip are the Orthodox elders to whom even Putin turns for spiritual advice. Some of these elders are semi-mythical personalities, but the names of some of them are well known — for example, Efrem, father superior of the Vatopedi monastery on Mount Athos in Greece (Putin made pilgrimages there in 2005 and 2016) or Pankraty, a priest in the Valaam Monastery in Russia’s Karelia, where Putin will spend three days this week. 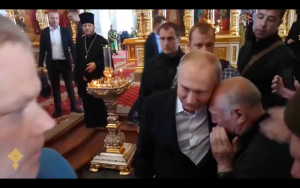 The former oligarch, Sergey Pugachev, who introduced Vladimir Putin at the end of the 1990s to the church hierarchy, said that Putin’s interest in the church at the beginning of his presidency was rational — he believed Orthodoxy to be the best common idea to rally people around and offered a basis for national identity. But as the years went on, Putin’s interest grew, wrote The Bell. 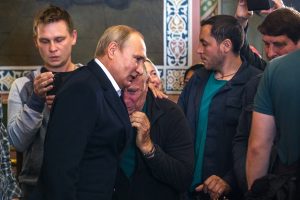 Whatever Putin’s true beliefs are, he has taken a page from the tsars themselves, using the church to unite Russia around a common identity, and a future blessed by the divine.

Russia Celebrates Women’s Day, One Of Its Biggest Holidays