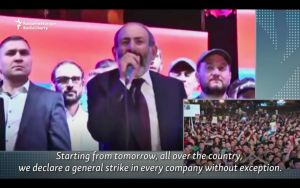 The Armenian parliament blocked opposition leader Nikol Pashinian from the post of prime minister, setting up a new crisis in the country and assuring social unrest. Pashinian had demanded he be elected to the PM post in order to stop the weeks of demonstrations which have rocked the country, and the region, over the former president being appointed prime minister in an attempt to maintain power. The fiery opposition leader called for nationwide strikes.

“Armenia’s parliament has voted 45-to-55 against opposition leader Nikol Pashinian as the country’s next prime minister, leaving him eight votes short of the simple majority he needed to win the post,” reported REFRL.

“Pashinian responded to Baghdasarian’s announcement by telling the legislature that the HHK’s parliamentary faction had “destroyed itself irreversibly” by “announcing war against its own people” and refusing to support his candidacy,” wrote RFERL.

Russia, which has been concerned over the political developments with its close ally, quoted Pashinian saying the two nations will remain close partners, “We consider Russia as a strategic ally, our movement does not create threats for this,” Pashinyan said. “If I am elected [as the prime minister], Armenia will remain a member of the Eurasian Economic Union and the Collective Security Treaty Organization,” reported Russian state news agency TASS.

Pashinian also vowed to deepen ties with the European Union. “We will deepen relations with the Eurasian Economic Union and the EU countries. We will do everything for eliminating visa requirements for Armenian citizens to enter the EU countries,” he said. “We hope to begin these talks soon,” reported TASS.