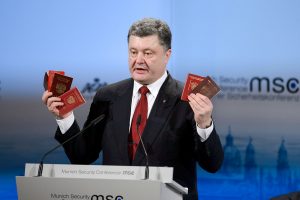 The reign of President Petro Poroshenko looks to possibly be coming to a close as the 2019 Ukrainian presidential election approaches. The unrestrained corruption pervasive throughout the Ukrainian system and the deportation of the former mayor of Odessa, Mikheil Saakashvili, due to his political activities, have tarnished the brand of the once-popular Ukrainian leader.

“Ukrainian President Petro Poroshenko’s popularity ratings are in free fall as three quarters of Ukrainians think the country is headed in the wrong direction, pollster Rating sociological group said on April 26. A second elections poll, also released on April 26, shows public support for Poroshenko and his Solidarity party has collapsed since the start of the year. Among those who will participate in the March presidential vote and are decided, 14.2% support Tymoshenko, 10.9% support pro-EU former defence minister Anatoliy Grytsenko, 9.4% support Russian-oriented natural gas trader Yuriy Boyko and only 9.3% support Poroshenko. More than 21% of those intending to vote are undecided, Concorde Capital said in a note,” reported bne Intellinews.

The leading contender, former Prime Minister, Yulia Tymoshenko has herself had problems with perceptions of corruption.

“As many as 75% of Ukrainians feel that the country is headed in the wrong direction,” the group’s founder Igor Tishchenko said at a press conference, reports Russian state news agency TASS.

“The peak [in optimism] happened after Maidan. At that time, 34% said the country was going in the right direction, while 48% believed Ukraine was headed in the wrong direction. That is, we are now back to the figures we had before the Maidan (unrest),” Tishchenko said.

Corruption remains the main stumbling block to Poroshenko being re-elected. The legacy of the Soviet Union lives on in Ukraine and corruption is pervasive throughout society. It has not been rooted out as was demanded with the Maidan Revolution which ousted pro-kremlin leader Viktor Yanukovych.

A total of 70% of respondents believe that the country needs radical changes, while 10% chose “to leave everything as it is now,” and 16% noted that they wanted everything to be “the way it had been before,” Interfax reports.

The revocation of Ukrainian citizenship of former mayor of Odessa, Mikheil Saakashvili, and his deportation to Poland, due to his political opposition activities seems to have also cratered Poroshenko’s popularity. Western Ukraine is firmly in the camp of the European Union and activities reminiscent of the USSR do not play well anymore.

The main concerns of the Ukrainian electorate are security and the establishment of the rule of law.