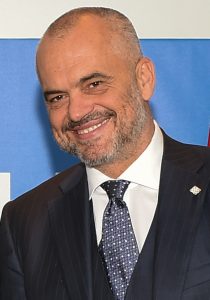 The electoral campaign for parliamentary elections in Albania have been accompanied by mutual accusations between the two parties that were in coalition during the last four-year governance, the Socialist Party and the Socialist Movement for Integration.

Socialist Party leaders, including Edi Rama, have often accused SMI of corruption; however because of being in a coalition, they were forced to silence critics connected to SMI’s sometimes illegal actions.

In his weekly communication of June 11, Prime Minister Edi Rama declared that if Albanians do not give him 71 votes to be the single runner, he will no longer be Prime Minister of Albania, as he has no motive to stay on top, if the public administration remains constrained and hostage to coalition party divisions.

He stressed, while admitting he needed votes to reform the state, they cannot accept coalition party blackmail and leave government posts in exchange for votes. There is no motivation to divide the public administration, surrendering to the pressures of SMI, like in the past four years. He mentioned two important institutions, the Mortgage and License Departments, asking voters rhetorically: “How much did you pay for the licenses?”

Following the publication of this information in the media, various readers have questioned how it is possible that the prime minister had such information on bribes and remained silent until the end of the coalition, which makes him complicit.

The newly elected chairman of the Socialist Movement for Integration, Petrit Vasili, responded to Edi Rama’s accusations on Facebook, writing that Rama loves to leave out important facts. He mentioned the fact that Ministry of Internal Affairs was run by SP, but that did not prevent drugs overflowing across Albania. According to Vasili, Rama would have thrown the country into an abyss, if he had the whole government for himself.

After the dissolution of the SP-SMI coalition, the idea of a new coalition with the Democratic Party has prevailing in the media and public opinion. But the SP parliamentary group leader, Gramoz Ruçi, has clarified that after the 25 June elections, the Socialist Party will have no coalition with anyone. While speaking in Fier district, where he runs as MP, he expressed his conviction that there will be no coalition with neither DP, nor SMI. He called on people to vote solely for SP and Edi Rama, the country’s biggest reformer, because he knows how to build a democratic state.

He also commented on the 18 May Rama-Basha agreement, describing it as beneficial for the country. According to Ruci, these elections will confirm for the first time that the loser knows how to accept defeat, and the winner to manage victory.

Astrit Patozi, a former Democratic Party MP, on Facebook argued that from such rumors of a possible SP-DP coalition, it is the DP that loses its credibility; Edi Rama only gains. He stated that in contrast to SMI, DP has chosen to defend itself from this diversion, publicly distancing itself from the possibility of a large coalition, whose idea would fade Democrats’ energies in the electoral campaign.

Lulzim Basha, who leads the united opposition under the Democratic Party’s seal, has repeatedly stated that they will not do political bargaining with SP or SMI, calling such rumor an urban legend with devastating consequences. He is convinced that this is the best way for DP to keep its momentum through the election campaign and also its goals to win on June 25 elections.