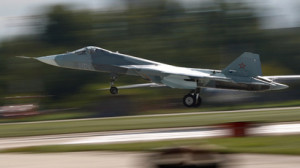 The PAK-FA fighter jet is Russia’s new 5th generation fighter and their answer to the U.S. F-35. It is designed as a multi-role aircraft for air superiority and ground attack missions. It is the first aircraft to be developed from the ground up by Russian industry since the fall of the Soviet Union and their first stealth fighter. To lower production and development costs, the aircraft is being jointly developed with the Indian air force. Tests of the aircraft are supposed to be completed this year with the first aircraft coming off the production line in 2017.

Air Force Commander-in-Chief Viktor Bondarev, who recently visited the KnAAPO production facility, has told RIA Novosti he is extremely pleased with the pace of the PAK-FA’s (also known as the T-50) development. “The eleventh T-50 aircraft is on berth and is 60-70 percent ready. This aircraft is going to be the final one in the test series,” Bondarev said, adding he is 100 percent sure the jets will pass government testing by the end of 2016.“Next year the aircraft goes into serial production,” he told RIA.

Bondarev said that the PAK-FA’s operational engine will be ready for testing next year and is likely to go into production in 2018. At the moment, the PAK-FA is powered with two AL-41F1 engines which enable it to fly at a supersonic cruise speed, have a 2,600 km/h top speed, and a range of 5,500 kilometers (with two drop tanks).The next-stage engine, currently dubbed ‘Type 30,’ is expected to have better speed and fuel economy characteristics. 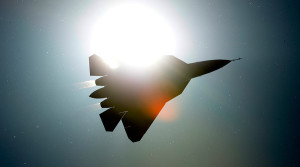 Is Russia Imploding Before Our Eyes, Again?

Kerry: Relationship With Russia Not Based On Trust